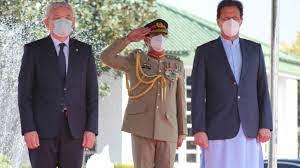 According to details, the honorable guests were presented guard of honor on their arrival.

Sefik Dzaferovic has called for peaceful resolution of Kashmir dispute in the light of UN Security Council (UNSC) resolutions.

He made the remarks during his meeting with Foreign Minister Shah Mahmood Qureshi in Islamabad today.

Dzaferovic said human rights should be respected in occupied Jammu and Kashmir. He said Pakistan and Bosnia enjoy close relations and his visit will further strengthen bilateral relations.

Shah Mahmood Qureshi briefed the Bosnian delegation about the situation in Indian illegally occupied Jammu and Kashmir and appreciated his statement on the occupied territory.

Shah Mahmood Qureshi said both the countries have always stood by each other in difficult times. He said Pakistan desires to expand relations with Bosnia in different fields including bilateral trade, education, culture and people to people contacts.

It is to be mentioned here that Chairman of the Presidency of Bosnia and Herzegovina, Sefik Dzaferovic had arrived in Islamabad on a two-day official visit earlier today. A high-level delegation, including the Minister for Security as well as Presidential Advisers was accompanying the Bosnian President.

During his stay, Chairman of the Presidency of Bosnia and Herzegovina, Sefik Dzaferovic will also hold talks with President Dr. Arif Alvi.

He will also have separate interactions with Speaker National Assembly, Foreign Minister Shah Mahmood Qureshi, Adviser to Prime Minister on Commerce and Investment, and other dignitaries.

The visit of the Chairman of the Presidency of Bosnia and Herzegovina will serve to enhance bilateral relations and strengthen cooperative bonds between the people of the two countries.

‘Cheap electricity to industries another important step towards economic stability’