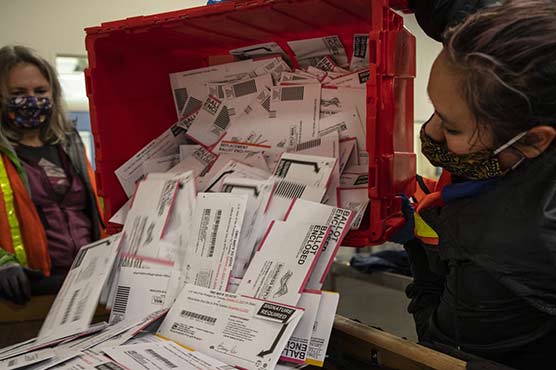 LOS ANGELES (AFP) – Oregon on Tuesday became the first US state to decriminalize hard drugs, including the possession of small amounts of heroin and cocaine, and to legalize access to “magic mushrooms” for therapeutic use.

Some other states, including Arizona and Montana, meanwhile appeared poised in early results to legalize recreational marijuana in line with a trend sweeping the country in recent years.

A ballot initiative in favor of decriminalizing a range of psychedelics was also approved in the nation’s capital, Washington DC, the fourth jurisdiction to enact the reform.

Votes on those measures came as Americans cast their ballots in the US presidential election.

Under Measure 110, possession of small amounts of illicit drugs in Oregon would be considered a civil violation and more money will be earmarked for addiction treatment and other services for people with addiction disorders.

“This groundbreaking initiative imagines a better way forward – instead of arresting and jailing people for drugs, it will offer help to those who need and want it,” the Drug Policy Alliance said in a statement.

The aim of the measure — backed by the Oregon Nurses Association, the Oregon chapter of the American College of Physicians and the Oregon Academy of Family Physicians — is to keep drug-addicted people out of the criminal justice system and to provide them with treatment.

“Punishing people for drug use and addiction is costly and hasn’t worked. More drug treatment, not punishment, is a better approach,” the groups said in a statement.

Also backing the measure was Facebook founder Mark Zuckerberg and his wife Priscilla Chan who contributed $500,000 through the Chan Zuckerberg Initiative.

However, opponents, including several local groups working on addiction policy, said the measure undermines local efforts and does not guarantee a set budget for treatment.

The state’s second groundbreaking initiative, Measure 109, legalizes the therapeutic use of psilocybin, or “magic mushrooms,” for people over the age of 21 suffering from a range of conditions including depression, addiction and anxiety.

The measure was spearheaded by Portland psychotherapists Tom and Sheri Eckert.

“There’s a lot of people suffering out there who need therapeutic options,” Tom Eckert told the local CBS station.

“We’re actually in the midst of a mental health crisis in Oregon. We have some of the highest rates of mental illness in the country. So the status quo really isn’t working.”

Under the measure, those who use and sell such drugs would be considered among the police department’s “lowest law enforcement priorities.”

That brings to 15 the number of US states that have approved the drug for recreational purposes since 2012. Medical cannabis for its part is already legal in 33 US states.

In 1973, Oregon became the first state in the country to decriminalize marijuana.