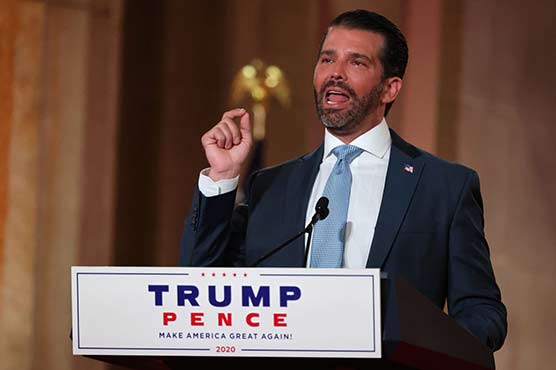 ISLAMABAD (Web Desk): The world countries have started to recognise Indian illegally occupied Jammu and Kashmir (IIOJK) as part of Pakistan after Prime Minister Imran Khan unveiled the new political map of the country back in August this year, Kashmir Media Service reported.

The latest recognition comes from US President Donald Trump’s son, Trump Junior, who while predicting polls results tweeted a world map that showed IIOJK as part of Pakistan.

Interestingly he chose Pakistan, including the entire Jammu and Kashmir, as voting for Donald Trump and India for his opponent Joe Biden.

Donald Trump Jr. tweeted the world map on Presidential Election Day in the US.

Trump Jr tweeted: “Okay, finally got around to making my electoral map prediction. #2020Election #VOTE Twitter users in Pakistan immediately spotted the development and made interesting remarks on the move.

Former Ambassador and Pakistan High Commissioner to India, Abdul Basit, in his tweet said, “Good. Jammu and Kashmir is shown as part of Pakistan. Very encouraging.”

A twitter user Ravale Mohydin wrote, “Can’t believe my eyes…for once, that’s the correct map for #Kashmir, that too from such an unexpected source!”

Another user wrote, “What I noticed in map u shared is complete map of Pakistan. Thank you so much”.

Yet another twitter user Jeremy McLellan wrote, “Thank you, Donald Trump Jr, for recognizing Jammu and Kashmir as part of Pakistan.”

It is worth mentioning here that the US President Donald Trump in his meeting with PM Imran Khan had offered to mediate between India and Pakistan over the long-standing Kashmir dispute.