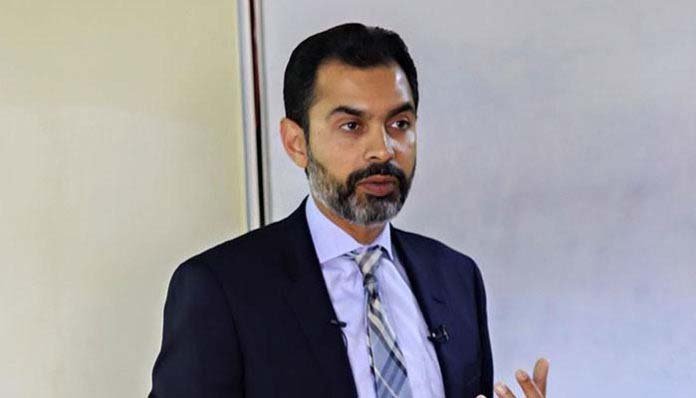 (Web Desk) – Governor State Bank of Pakistan, Dr. Reza Baqir, paid a visit today to the Sialkot Chamber of Commerce and Industry (SCCI) on the invitation of its President, Mr. Qaisar Iqbal Baryal. The purpose of his visit was to seek firsthand knowledge from the businesses community, particularly the exporters, on the economic challenges faced by them in the face of global slowdown amid covid-19 pandemic.

At the outset of his visit, said that an ongoing dialogue between the policy makers and business community on the economic measures and their effectiveness is key to combat the prevalent domestic as well as global economic challenges.

In this regard, the Governor acknowledged the proactive role played by SCCI in raising awareness about the issues and their potential solutions with the policy makers. Deputy Governor, Ms. Sima Kamil, MD SBP BSC, Mr. Muhammed Ashraf Khan and other members of the senior management were also accompanying the Governor during this visit.

Dr. Baqir’s address on the occasion encompassed many topics. He said that the effects of COVID-19 had taken a heavy toll on economies all over the world and Pakistan was no exception.

While elaborating the proactive steps taken by SBP since the onset of Covid-19 pandemic, as early as March 2020, the Governor elaborated that the overall objective of these measures was to minimize the negative fallout of the slowdown in the economy on businesses and employment in the country.

Overall, the SBP measures aimed at ensuring increased and affordable financing to the businesses to help them manage their cash flows and financial costs effectively. In this regard, SBP reduced policy rate from 13.25 percent to 7 percent in a very short span of time that is historically unprecedented, he said.

Shedding more light on the measures to keep the wheel of economy rolling, the Governor elaborated some other key steps taken by SBP in addition to reducing interest rates. The Governor shared the details of Deferment of Principle Amount and Restructuring of Loans Package to facilitate the borrowers in a bid to preserve the solvency of the borrowers and enable them to combat temporary economic disruptions.

Under this scheme, over 1.5 million borrowers benefitted with over Rs655 billion loans deferred and about Rs200 billion restructured. Another major step by SBP to offset the sudden impact of economic shock was to prevent layoff of workers. SBP introduced its Rozgar Scheme that aimed at preventing layoff of workers by financing wages and salaries of all kinds of employees for private sector businesses.

During the availability of this scheme, almost 3,000 businesses availed refinancing of over Rs237 billion benefitting over 1.6 million employees or workers.

The Governor contended that in the backdrop of COVID-19, SBP provided a number of relaxations under Export Finance Scheme (EFS) and Long Term Finance Facility (LTFF). These included additional period of six months for making shipment against loans availed under EFS; additional period of six months for meeting required export performance against loans availed under EFS; reduction in showing export performance relaxation in the eligibility criteria for availing finance under LTFF and allowing deferment of principal amount for one year and/or rescheduling/ restructuring of loans under LTFF.

The Governor explained that the Housing and Construction Sector is a priority sector for the Government for its widespread economic impact and potential for job creation. In line with its vision of providing affordable housing to the masses, Government of Pakistan will be providing a markup subsidy facility for the construction and purchase of new houses.

This facility will allow all individuals, who will be constructing or buying a new house for the first time, to avail bank’s financing at subsidized and affordable markup rates. Apart from creating incentives for banks to indulge in housing finance, they have also been assigned mandatory targets to banks to extend mortgage loans and financing for developers and builders to ensure the consistent flow of financing over time.

After visit of SCCI, Governor Dr. Baqir visited the factories of some key exporters to have firsthand knowledge about the potential for international quality exports from Pakistan.