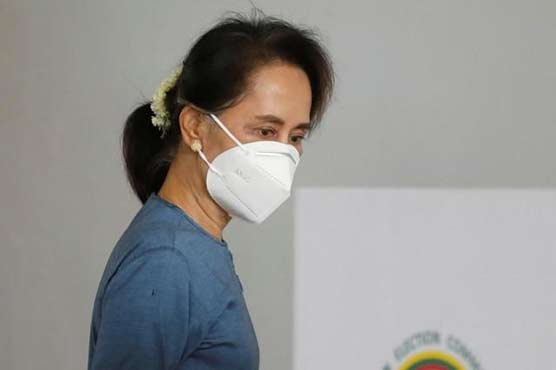 YANGON (AFP) – Polls opened in Myanmar on Sunday morning for a vote expected to return to power the government of Aung San Suu Kyi, who remains a hero at home in spite of a reputation abroad shattered by the Rohingya crisis.

The election will be just the second since the Southeast Asian nation emerged from nearly half a century of junta rule in 2011.

Five years ago Suu Kyi’s National League for Democracy (NLD) won a landslide victory, but was forced by the constitution into an uneasy power-sharing agreement with the still-mighty military.

This time the civilian leader — in a bid to maintain an absolute majority — has implored citizens to overcome their fears of coronavirus to turn out and cast their ballots.

“Every single voter is writing their own history, this election’s history and our country’s history,” she told the nation in a video message posted on Facebook Thursday.

Voters across the country joined long lines before the sun had even risen on Sunday as they waited for polling stations to open, largely maintaining physical distance and wearing compulsory face masks in the coronavirus-disturbed vote.

Cases have spiralled upwards in recent months, sending swathes of the country into lockdown and largely forcing election campaigns online, where hate speech between rival factions has flourished.

But Suu Kyi, who has placed herself front and centre in the fight against the epidemic, refused to postpone the polls.

“I’m not at all afraid of being infected with Covid-19,” said 27-year-old Khine Zar Chi, voting for her first time in downtown Yangon.

Authorities allowed the elderly to vote in advance — including the 75-year-old Suu Kyi and the president — as well as internal migrants casting ballots in temporary constituencies.

UN chief Antonio Guterres on Friday called for a “peaceful, orderly and credible” election, although doubts about the vote’s credibility have already overshadowed the poll.

Virtually all the 600,000 Rohingya Muslims remaining in the country — half of whom are of voting age — are stripped of citizenship and rights, including their chance to vote.

“This is an apartheid election,” said rights group Burma Campaign UK, adding the polls were “less free and fair than the last”.

Restrictions across many other ethnic minority areas — ostensibly for security concerns — mean around two million voters are disenfranchised from an electorate of 37 million.

The NLD-appointed election commission has also been lambasted for lacking transparency and bungling logistics, from voter lists to alleged discrimination against Muslim candidates.

Even army chief Min Aung Hlaing weighed in this week, giving rare public criticism of what he called “weakness and deficiencies” in the vote’s organisation and warning the government to “be careful”.

The military still wields huge power, retaining control of three key ministries and a quarter of all parliamentary seats.

The comments signalled a “new low point in civilian-military relations” even if a coup or other power grab remained very unlikely, said Yangon-based analyst Richard Horsey, who predicted a landslide for the NLD.

As the army chief on Sunday emerged in civilian clothes from a polling station in the capital Naypyidaw, he told reporters: “We will have to accept the results”.

Suu Kyi’s defence of the country against genocide charges at the UN’s top court played well to the Bamar Buddhist majority, who widely view the Rohingya as illegal immigrants.

The persecuted community garnered little sympathy when brutal military operations in 2017 forced about 750,000 to flee from Rakhine state over the border to Bangladesh.

Myanmar is wracked by numerous other long-running conflicts in ethnic minority areas.

Many of these minorities, already disadvantaged by the electoral system, are now deprived of their vote.

This poses a “huge risk” of election or post-election violence, warned Horsey.

Delhi fears the worst amid smog cloud and coronavirus wave