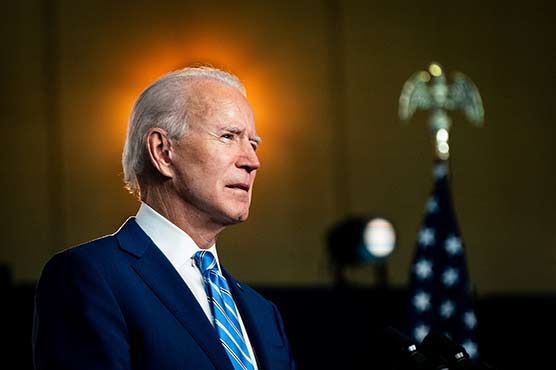 Biden said business and labor leaders had signaled willingness to work together to bolster the pandemic-battered U.S. economy but stressed COVID-19 first must be brought under control.

The Democratic president-elect delivered a speech and took questions from reporters in Wilmington, Delaware, after consulting jointly with the CEOs of top U.S. companies and labor leaders on Monday. He welcomed further progress in COVID-19 vaccine development.

Biden will inherit an economy that has suffered millions of job losses during a pandemic that has killed more than 246,000 people in the United States. U.S. COVID-19 cases are surging as Biden prepares to take office on Jan. 20.

“We’re going into a very dark winter. Things are going to get much tougher before they get easier,” Biden said of the pandemic.

Biden again called upon the Trump administration to cooperate with his transition team on containing the surge in cases. “More people may die if we don’t coordinate,” he said.

He urged Congress to pass pandemic relief legislation. Talks on such legislation stalled for months before the Nov. 3 election.

Biden insisted, however, that Trump’s refusal to concede was not inhibiting his transition efforts. “I find this more embarrassing for the country than debilitating for my ability to get started,” he said.

On other economic matters, Biden said he plans to pursue “a fairer tax structure” with corporations paying their fair share and added that he wanted to see a $15 hourly minimum wage nationwide. Biden said no government contracts will be given to companies that do not make products in the United States.

In statements, the companies referred to Biden as the “president-elect,” and GM said it was looking forward to “working with the new administration,” – tacit rejections of Trump’s challenge to the election results.

Also taking part were AFL-CIO president Richard Trumka and the heads of the Service Employees International Union, the United Auto Workers and two other large unions.

Biden said Moderna Inc s MRNA.O announcement that its experimental COVID-19 vaccine was 94.5% effective based on interim data from a late-stage trial provided fresh hope for beating the coronavirus. Coupled with positive results last week on a rival Pfizer Inc PFE.N shot, Moderna s news added to optimism that widespread vaccination in the coming months could help tame the pandemic.

Asked whether he personally would be willing to get vaccinated with one of the newly developed shots, Biden told reporters, “I wouldn’t hesitate to get the vaccine.”

“They appear to be ready for prime time, ready to be used,” Biden said of the two vaccine candidates.

Biden urged Americans to limit the number of people at gatherings for next week’s Thanksgiving holiday, with social distancing and masks encouraged.

Biden pressed ahead with economic planning even as the Republican Trump on Monday again refused to accept his election loss. Trump’s national security adviser, Robert O’Brien, said on Monday he was prepared to ensure a professional transition to Biden’s team.

“If the Biden-Harris ticket is determined to be the winner, and obviously things look like that now, we’ll have a very professional transition from the National Security Council, there’s no question about it,” O’Brien said.

Biden beat Trump by the same 306-232 margin in the state-by-state Electoral College that prompted Trump to proclaim a “landslide” victory in 2016. Biden also won the national popular vote by at least 5.5 million votes, or 3.6 percentage points, with some ballots still being counted.

Trump has made no headway with legal actions in multiple states so far. On Monday, the Wisconsin Elections Commission said a statewide vote recount would cost an estimated $7.9 million, money that Trump’s campaign would have to pay in advance should it request one.

Biden won Wisconsin by a margin of 0.7 percentage point, or about 20,000 votes, with 99% of ballots counted, according to Edison Research.

Election officials from both parties have said there is no evidence of major irregularities. Federal election security officials have decried “unfounded claims” and expressed “utmost confidence” in the election’s integrity.

Trump suffered another setback when James Bopp, a conservative attorney, on Monday voluntarily withdrew lawsuits filed in federal courts seeking to block the states of Georgia, Michigan, Pennsylvania and Wisconsin from certifying their election results. The lawsuits made unsubstantiated claims of illegal voting.

UK’s Johnson says devolving powers to Scotland was ‘a disaster’