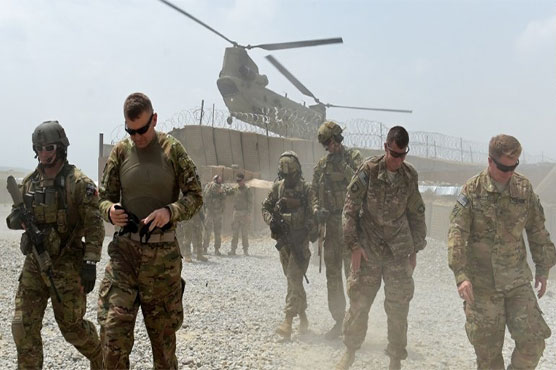 WASHINGTON (Web Desk) – US military commanders are anticipating that a formal order will be given by President Donald Trump as soon as this week to begin a further withdrawal of US troops from Afghanistan and Iraq before Trump leaves office on January 20, according to two US officials familiar.

On October 7 Trump tweeted: “We should have the small remaining number of our BRAVE Men and Women serving in Afghanistan home by Christmas!”

Republican Senate Majority Leader Mitch McConnell did not criticize Trump directly Monday while discussing the drawdown plans but warned of the potential ramifications of a rapid withdrawal of US forces from Afghanistan, saying it would “hurt our allies.

“We re playing a limited — limited — but important role in defending American national security and American interests against terrorists who would like nothing more than for the most powerful force for good in the world to simply pick up our ball and go home,” he said in a speech from the Senate floor.

“There s no American who does not wish the war in Afghanistan against terrorists and their enablers had already been conclusively won,” he said. “But that does not change the actual choice before us now. A rapid withdrawal of US forces from Afghanistan now would hurt our allies and delight — delight — the people who wish us harm.”

The decision to pull additional troops out of Iraq comes as the Trump administration has moved to reduce the US military s footprint there in recent months.

The US commander in the Middle East announced a drawdown of US troops in Iraq from 5,200 to 3,000 in September.

In March, US forces began pulling back from bases across Iraq, turning them over to Iraqi security partners. At the time, Pentagon officials insisted that the base hand-offs were part of a long-planned consolidation that reflected the success of the anti-ISIS fight — not concerns over the ongoing rocket attacks by Iran-linked proxy militias.

– Sweeping changes at the Pentagon –

US military officials have long stressed that the US withdrawal from Afghanistan should be conditions based, including the Taliban breaking its ties to al Qaeda and making progress in peace talks with the Afghan government, two conditions that have yet to be met.

But despite the lack of progress, the Trump administration has already substantially reduced US troops in the country by more than 50%, recently bringing the number of US military personnel there down to about 4,500, the lowest levels since the earliest days of the post 9/11 campaign.

Trump made bringing American troops home a theme of his reelection campaign but the future of US forces in Afghanistan has remained uncertain amid the mixed messages coming from the administration.

National security adviser Robert O Brien has advocated for a more accelerated withdrawal from Afghanistan irrespective of conditions on the ground, something made more feasible by the installation of White House loyalists in senior defense posts.

Chairman of the Joint Chiefs of Staff Mark Milley had pushed back on an earlier announcement from O Brien suggesting an aggressive timeline for troop withdrawals that appeared to be irrespective of conditions.

“Robert O Brien, or anyone else, can speculate as they see fit, I am not going to engage in speculation, I m going to engage in the rigorous analysis of the situation based on the conditions and the plans that I m aware of in my conversations with the President,” Milley told NPR on October 11.

Sweeping changes at the Pentagon last week have put Trump loyalists in place and knowledgeable sources told CNN s Jake Tapper last week that the White House-directed purge at the Defense Department may have been motivated by the fact that former Secretary of Defense Mark Esper and his team were pushing back on a premature withdrawal from Afghanistan that would be carried out before the required conditions on the ground were met.

Those changes included installing an ardent opponent of the US military s presence in Afghanistan, who once called for the use of lethal force against illegal immigrants and has made a litany of racist comments, as a senior adviser at the Pentagon.

A Pentagon spokesman confirmed Wednesday that retired Army Col. Douglas Macgregor “will be serving as a Senior Advisor to the Acting Secretary of Defense. Mr. MacGregor s decades of military experience will be used to assist in the continued implementation of the President s national security priorities.”

Macgregor has been a vocal opponent of the US military s mission in Afghanistan and has called for a total withdrawal of US troops and the American Embassy despite the continued presence of terrorist groups there.

Republican Sen. Rand Paul of Kentucky who is a strong advocate of withdrawing US troops welcomed the appointment.

“I am very pleased @realDonaldTrump asked my friend Col. Doug Macgregor to help quickly end the war in Afghanistan. This and other picks for Pentagon are about getting the right people who will finally help him stop our endless wars,” Paul tweeted.

In one of his first moves as acting Defense Secretary, Miller sent a seemingly contradictory message to the force on Friday, saying the US must continue its battle against al Qaeda and the terrorist forces behind 9/11 while also saying it was time to bring troops home.

“This war isn t over,” Miller wrote in his message. “We are on the verge of defeating al Qaida and it s associates, but we must avoid our past strategic error of failing to see the fight through to the finish.”

“Indeed, this fight has been long, our sacrifices have been enormous, and many are weary of war — I m one of them — but this is the critical phase in which we transition our efforts from a leadership to supporting role,” he wrote in reference to the current US role of supporting counterterrorism campaigns such as the one in Afghanistan.

“All wars must end. Ending wars requires compromise and partnership. We met the challenge; we gave it our all. Now, it s time to come home,” Miller added.