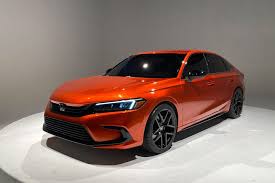 (Web Desk) – This is the 2022 Honda Civic Prototype, and while it is billed as a prototype, it provides us with a good idea of what the production-spec model will look likeIn creating the 11th-generation Civic, Honda has given the sedan a low and wide stance with a more sophisticated and upmarket design than the outgoing model.

Honda says it previews the all-new Civic that will first launch in America during the spring of 2021, first in Sedan guise and then followed up by the Civic Hatchback, Civic Si and Civic Type The Japanese carmaker’s designers started with the low overall height and low hip point of the 10th-generation model and applied a new “thin and light” design ethos that includes a low hood and front fenders, as well as a low horizontal Up front, there is a new upright grille and distinctive headlights. Other key design elements include a sharp horizontal shoulder and a rear end with a wider track and new taillights. The prototype is also wearing a new color dubbed Solar Flare Pearl.