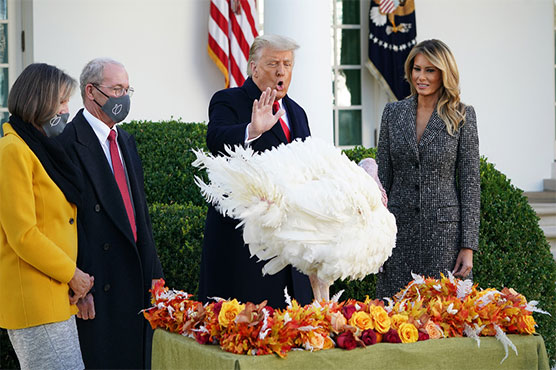 .
WASHINGTON (AFP) – Lame duck President Donald Trump addressed a live turkey and journalists Tuesday but again avoided the elephant in the room — his failure to concede defeat to Joe Biden.

The annual Rose Garden ceremony to spare a turkey from joining the 45 million or so birds cooked for Thanksgiving dinner this Thursday featured a relaxed Trump.

“What a bird,” he said to the large white turkey named Corn, noting that Thanksgiving is a “special day for turkeys” but “for the most part not a very good one.”

The pardoning event, a decades-old tradition, is usually no more than a quirky photo-op.

This time journalists pored over every syllable, wondering if Trump would finally concede the election or perhaps hint at pardons for some of his human friends currently or formerly behind bars before he leaves office.

There was no concession. There were no hints.

Likewise, there was no reference to his approaching January 20 departure or his refusal three weeks on from Election Day to congratulate Biden when he made a surprise appearance before journalists earlier.

The White House press corps scrambled — wondering if history was about to be made — when Trump s staff announced with two minutes warning that he d be appearing at the briefing room podium.

But when Trump emerged alongside Vice President Mike Pence, it was only to deliver a run-of-the-mill statement about record highs on the US stock market. This lasted one minute and then he was gone, taking no questions.

Trump, who for four years was omnipresent on television, radio and in print with almost daily interactions with journalists, has not taken questions at all from the media since his defeat.

And he has gone to his golf club in Virginia about as often as he has made public work appearances.

Biden is forming an incoming cabinet, talking with foreign leaders, and as of Monday has been able to access official government help with his transition to power.

The election results were not especially close and Trump s attempts to challenge the validity of ballots are flaming out in state after state.

Yet Trump began Tuesday with more Twitter defiance in the face of reality.

“I concede NOTHING!!!!!” was the caption on a retweet showing Trump glowering over the Resolute Desk in the Oval Office.

Expectations are that one thing Trump will be sure to do at the close of his one-term presidency is use his broad power for issuing pardons — just as many predecessors have done.

Often these are relatively uncontroversial shows of mercy or attempts to promote national reconciliation, such as blanket pardons by presidents Gerald Ford and Jimmy Carter for Americans who dodged the Vietnam War draft.

Trump is expected to expand his previous focus on pardons for people given harsh prison sentences for relatively minor drug crimes as far back as in the 1990s.

But he has also frequently mused over the possibility of entering the murkier waters of granting pardons to friends or even to people caught up in crimes related to his administration.

Facing multiple legal probes over his tax affairs, alleged campaign finance crimes and sexual assault allegations, Trump has stated that he could issue a pardon to himself — though there appears to be little legal backing for this view.