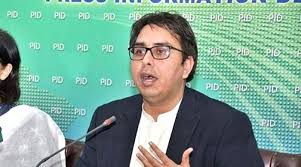 ISLAMABAD (City News) – Special Assistant to Prime Minister for Political Communication Shahbaz Gill has said that a legal procedure has to be followed for granting parole but Marriyum Aurangzeb is continuously playing politics on the matter.

Reacting to a statement by Pakistan Muslim League-Nawaz (PML-N) spokesperson, Shahbaz Gill said that PML-N is continuously talking about release of people who are in jail but those who are roaming free are not willing to attend the funeral.

He asked why Nawaz Sharif and his sons are not coming to attend the funeral and said that government will facilitate them in every aspect in this regard if they choose to return to Pakistan.

Marriyum Aurangzeb took to Twitter and said a normal legal procedure has been deliberately slowed down and made complex. She said linking Shehbaz Sharif and Hamza Shahbaz’s release with arrival of Begum Shamim Akhtar’s dead body is peak of apathetic behavior and small mentality.

The PML-N leader said that the government has hit new lows by doing politics on the sad occasion of the death of Shehbaz Sharif’s mother. She had earlier confirmed that Begum Shamim Akhtar’s body will reach Lahore on Saturday.