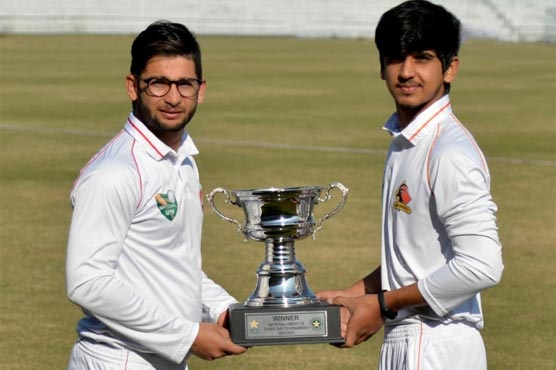 RAWALPINDI (City News) – Defending Champions Sindh U19 are taking on table-toppers Northern in the National U19 Three-Day Tournament final, a four-day affair, at Rawalpindi’s KRL Stadium from 28 November.

Both sides had met in the final of last edition, in which Sindh came out victorious by a seven-wicket margin. Aamir Ali was the star performer, taking eleven wickets for 133 runs.

The two sides have played each other once in the round-robin stage of the tournament. Northern won that match by seven wickets on the back of all-round performance by Mubasir Khan, who took nine wickets for 135 and scored an unbeaten 68-ball 60 in the fourth innings of the match to help his team chase the target easily. For Sindh, Hassan Jafri’s 105 off 192 balls went in vain.

After the completion of group stage, Northern topped the points table with 20 points, while Sindh finished at the second place with 14 points.

They are being led by left-handed batsman Saim Ayub, who has scored 212 runs – including a half century– in five matches with an average of 42.40. He has also taken five wickets in the tournament.

After clinching the National U19 One-Day tournament with a 53-run win over Northern in the final at Lahore’s Gaddafi Stadium on 2 November, Sindh are looking to repeat the heroics.

Sindh are banking on spin twins Adeel Meo and Aaliyan Mehmood, who are placed at number four and five, respectively, amongst the list of highest wicket-takers in the tournament. Adeel, with his left-arm spin, has picked 15 wickets from five matches, with an average of 19.73. His best figure in an innings was six for 32, which came against Balochistan in the first round of the tournament, which Sindh won by nine wickets.

Aaliyan, with his right-arm off-spin, has grabbed 14 wickets from five matches with an average of 27.07.

Northern are headed by 17-year old wicketkeeper-batsman Mohammad Raza-ul-Mustafa, who has five dismissals under his belt. He topped last year with 25 dismissals from six matches in the three-day tournament.

The Northern captain is hugely relying on the expertise of Mubasir Khan, who as an all-rounder has scored 208 runs, with two half-centuries, at an average of 41.60 and took 22 wickets with an average of 14.27. His best figures of six for 37 in an innings came against Sindh, helping his side to a seven-wicket win.

The other notable run-getter for Northern has been Mohammad Shoaib Khan, who has scored 233 runs at an average of 46.60.

Sindh U19 captain Saim Ayub: “We have done our preparations well and look forward to win yet another final. We made mistakes in the round match against Northern, but we will not repeat them.

“Like last season, we will try to end the U19 season on a winning note and take another trophy back home.”

Northern U19 captain Mohammad Raza-ul-Mustafa: “We have worked hard and will try to rectify mistakes made earlier in the final of National U19 One-Day tournament against Sindh.

“We are in the final because of consistent performances from our players and will try to continue this in the final was well.