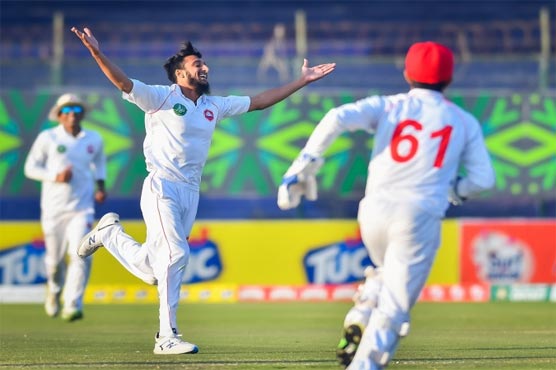 KARACHI (City News) – Northern’s Munir Riaz recorded a five-wicket haul on debut on day two of his side’s fifth round first-class Quaid-e-Azam Trophy fixture against Khyber Pakhtunkhwa at the National Stadium on Friday.

The 19-year-old right-arm pacer took five wickets for 91 runs as Khyber Pakhtunkhwa were 249 for seven and 211 runs behind Northern at the close of play.

The former Pakistan U19 bowler rolled over Khyber Pakhtunkhwa’s top and middle-order as he accounted for Musadiq Ahmed (19), Israrullah (19), Adil Amin (11), Zohaib Khan (0) and Sajid Khan (18).

The only notable resistance came from Kamran Ghulam and captain Khalid Usman, as both scored half-centuries.

Kamran, the 25-year-old right-handed batsman, registered his ninth half-century with the team’s top score of 67, which included nine fours. This was his third half-century in the ongoing season.

Khalid, fresh from an unbeaten 92 not out, which played a crucial role in his team’s resurgence and an eventual victory in their last round match against Central Punjab, smashed 10 fours and a six in his 59 not out off 82 balls.

Earlier, Northern added 89 runs for the loss of four wickets at a run rate of just a shade below six an over to their overnight score to post a daunting 460 for nine declared and pocketed all five bonus points on batting on offer.

Faizan Riaz, who scored his first century of the season yesterday, added 22 runs to his overnight total before Asif Ali smashed an unbeaten 45-ball 52, studded with four fours and two sixes.

Faizan was dismissed on 146 by pacer Arshad Iqbal, who returned three for 75. Faizan, the 32-year-old right-handed batsman, crunched 18 fours and a six.

Khyber Pakhtunkhwa pocketed three bonus points for bowling as they had dismissed eight Northern batsmen by the completion of the 100 overs.

Centuries by Salman Ali Agha and Muhammad Imran lifted Southern Punjab to an imposing 527 for seven in 134 overs in the ongoing Punjab Derby at the UBL Sports Complex. Southern Punjab resumed the day’s play at 272 for five.

Salman and Imran resumed their innings on 62 and three, respectively, and went on to stitch 187-run stand for the sixth wicket which further pushed the Central Punjab bowlers on the backfoot.

Their alliance was ended with the run out of Salman, who went back to the hut after accumulating 169 runs from 183 balls. The 27-year-old smashed 21 fours and three sixes.

Imran, on the other hand, returned unbeaten on 100 as he recorded his maiden ton in first-class cricket. The 23-year-old faced 143 balls, 11 of which were dispatched to boundary.

Central Punjab skipper Hasan Ali was the pick of the bowlers with two wickets for 79. Waqas Maqsood and Ahmed Safi Abdullah also dismissed two batsmen each.

After the completion of the 100 overs, the scorecard read 358 for five. As such, the batting team gained four bonus points. Central Punjab got only one bonus point for bowling.

Central Punjab were 136 for two in 41 overs when stumps were drawn thanks to Ali Zaryab’s second first-class half-century. The 21-year-old opener struck eight fours and a six in his 111-ball 67 and knitted a 92-run opening stand with Ahmed Shehzad, who scored 33.

Central Punjab have a hefty 391-run trail to surmount. Usman Salahuddin and Mohammad Saad will resume the proceedings for them at 18 and nine.

Balochistan’s Ayaz Tasawar converted his overnight score of 67 into his career’s third century with a brilliant 138 not out as Balochistan posted 458 for nine declared in 115.5 overs against Sindh at the State Bank Stadium.

The 29-year-old left-handed batsman smashed 13 fours and two sixes as he scored an unbeaten 138 off 244 balls.

He stitched a 192-run partnership for the fourth wicket with Akbar-ur-Rehman, who could add only nine runs to his overnight score before he was dismissed on 164 by pacer Shahnawaz Dhani, who with four for 79 in 21 overs was the pick of the bowlers for Sindh.

Balochistan fell three runs short of accumulating all five batting points as they managed 397 for six in 100 overs. For dismissing six batsmen, Sindh got two points.

Solid half-centuries by Omair Bin Yousuf and Saud Shakeel highlighted Sindh’s reply. They were 175 for one in 51 overs at the close of the day’s play.

Omair, who had scored a remarkable 153 against Southern Punjab at the National Stadium in the fourth round, was unbeaten on 74 which included seven fours and two sixes.

Saud Shakeel had struck eight boundaries for his 67 runs.

Sharjeel Khan was bowled by Mohammad Talha on 26.