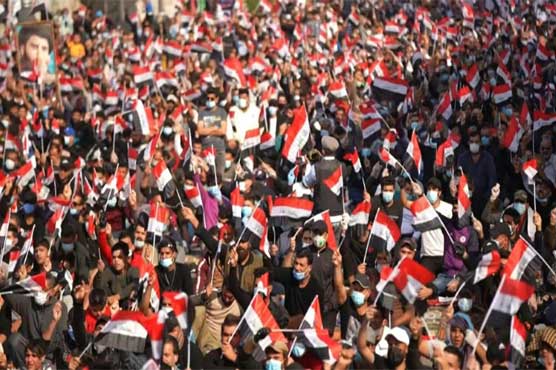 BAGHDAD (AFP) – Tens of thousands of supporters of Shiite cleric Moqtada Sadr packed the streets of the Iraqi capital Friday in a show of force as preparations ramp up for June parliamentary elections.

Despite the novel coronavirus pandemic, they gathered shoulder-to-shoulder for noon Muslim prayers in Baghdad s Tahrir Square, spilling out into the surrounding streets.

“This is a protest against the corrupt, the oppressors, who have driven Iraq to brink of bankruptcy, to the brink of the abyss,” said Talal al-Saadi, a cleric who was among those protesting on Friday.

In a sermon read out by Sadr s representative, the firebrand leader called for a “Sadrist majority in parliament”.

Sadr is very rarely seen in public and did not attend the rally.

Iraq is facing its most dire fiscal crisis in decades following a collapse in oil prices earlier this year and the economic impacts of the Covid-19 pandemic, with the government unable to pay public sector salaries on time.

The Sadrist movement had called for protests to back the reform of what it says is a corrupt state, but its populist chief has also been making moves ahead of next year s vote.

In a tweet this week, Sadr said he expected major wins for his party and would push for the next prime minister to be a member of the Sadrist movement for the first time.

Sadrists had already won big in the May 2018 vote with 54 of parliament s 329 seats, granting him the biggest single bloc.

This summer, Prime Minister Mustafa al-Kadhemi set June 2021 as the date for the next parliamentary elections — nearly a year ahead of schedule to fulfil a key demand of the youth-dominated protest movement that erupted across Iraq in October 2019.

They will take place under a new electoral law agreed by parliament that will see district sizes reduced and votes for individual candidates replacing list-based ballots.

Most observers expect a delay of at least a few months while political parties prepare the groundwork of their campaigns, but experts say the new system is likely to benefit Sadr and his candidates.

On Friday, Sadr supporters carried Iraq s national tricolour and posters of the cleric, some of which evoked his past as a militia leader by depicting him in camouflage.

“Obeying Sadr s call, we re making a stand that the whole world will see — we don t want criminals or corrupt people in Iraq,” said protester Ahmad Rahim, with an Iraqi flag draped around his shoulders.

“We call the shots,” he added.