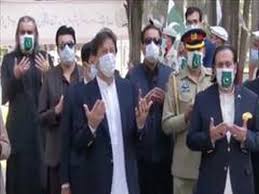 According to details, the oath was administered by Governor Raja Jalal Hussain Maqpoon at the Governor House. Prime Minister Imran Khan was also present on the occasion.

The ceremony was held with limited guests while strict standard operating procedures (SOPs) were also followed to avoid the spread of coronavirus.

The oath was administered by Governor Raja Jalal Hussain Maqpoon at the Governor House.

Khalid Khurshid was elected as Gilgit-Baltistan CM on Monday night after grabbing 22 votes. He won the seat from GBLA-13 constituency in General Elections that were held on November 15