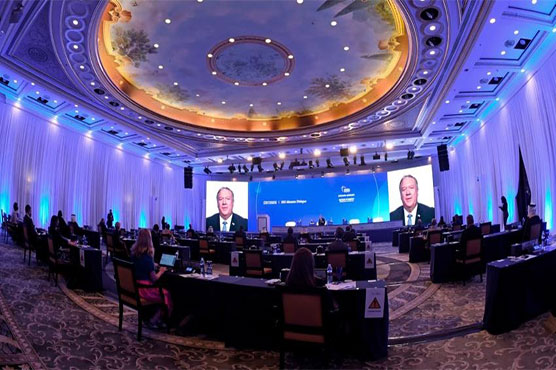 DOHA (AFP) – Rivals Qatar and Saudi Arabia, along with neutral Oman and Kuwait, said Friday progress had been made towards resolving the Gulf crisis that has pitted a regional group of nations against Doha.

US Secretary of State Mike Pompeo said he hoped Washington could broker a resolution but cautioned he was “out of the prediction business in terms of timing”, signalling a breakthrough may not be imminent.

Qatar and Saudi Arabia s foreign ministers, along with Oman s foreign ministry, tweeted similarly worded statements thanking Kuwait and the US for their efforts to resolve the spat — but gave no details on the talks.

They subsequently forced out Qataris residing in their countries, closed their airspace to Qatari aircraft and sealed their borders and ports, separating some mixed-nationality families.

“We have achieved certain progress at a certain point of time more than a year ago, and then things have slowed,” Qatar s Foreign Minister Sheikh Mohammed bin Abdulrahman Al-Thani said at the Mediterranean Dialogues forum in Rome.

“Right now, there are some movements that we hope will put an end (to) this crisis,” he said, without giving details.

“We believe that Gulf unity is very important for the security of the region. This needless crisis needs to end based on mutual respect.”

Analysts had previously suggested that any breakthrough could only cover bilateral relations between Riyadh and Doha, excluding the UAE in particular, which has been the most vocal critic of Doha since the crisis began.

Prince Faisal s comments could mean that a broader thaw is on the horizon, but Abu Dhabi and Manama have yet to weigh in on the progress of efforts to resolve the crisis.

US President Donald Trump s son-in-law and senior adviser, Jared Kushner, is reported to have raised the Gulf crisis and pushed for progress towards ending the spat during a visit to Qatar on Wednesday.

Few details have been made public about Kushner s trip, which could have been his last chance to press diplomatic issues in the region that has been a focal point for the outgoing Trump administration. Kushner also visited leaders in Saudi Arabia as part of the trip.

“It s time for this conflict to be resolved,” said Pompeo, who spoke via videoconference at the Manama Dialogue conference on regional security.

Saudi Arabia s closure of its airspace has forced Qatar Airways to fly over Iran, Riyadh s arch-rival and long-time adversary of Washington, reportedly paying Tehran $100 million annually to do so.

The White House has ramped up its rhetoric against Iran as the Trump presidency draws to a close, having walked out of an international deal to rein in Tehran s nuclear programme in 2018.

Past mediation efforts to broker reconciliation between key US ally Qatar and its rivals have proved fruitless after apparent progress.

US national security adviser Robert O Brien said in November that allowing Qatari planes to fly over Saudi Arabia via an “air bridge” was a priority for the outgoing Trump administration.

In return, Qatar could agree to tone down the coverage of Saudi Arabia by its media, including the Al Jazeera broadcaster, according to an analyst, who declined to be named due to the issue s sensitivity.

Qatar has repeatedly said it is open to talks without preconditions, though Doha has not signalled publicly it would compromise on the 13 demands of the boycotting countries.

Regional analyst Michael Stephens said Kuwait s intervention was “a way of making sure they re not the ones blamed if it goes wrong — and of making sure the other side understands there s some goodwill there to keep going”.

Qatar s Assistant Foreign Minister Lolwah al-Khater told Al Jazeera that Kuwait s comments signalled the “beginning of the path to a solution, and it is an important and positive step”.

UN Secretary General Antonio Guterres was “encouraged” by the developments, his spokesman said at a media briefing, and stressed “the importance of Gulf unity”.

Turkey, a friend of Qatar, also welcomed the progress made.

“We are delighted with the positive developments in settling the disagreement that has been going on since June 2017 in the Gulf region,” the Turkish Foreign Ministry said in a statement

After troop cuts in Iraq and Afghanistan, Trump orders pullout from Somalia