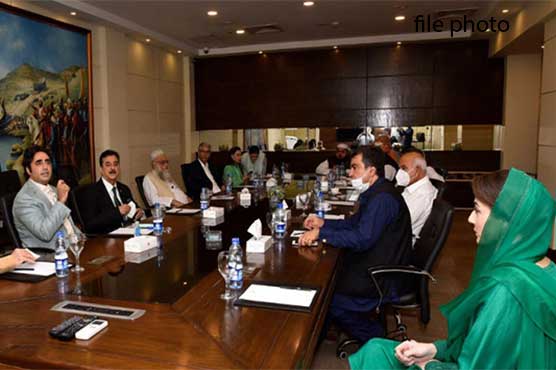 PDM leadership to meet on December 8 in Islamabad

LAHORE (City News) – Pakistan Democratic Movement’s (PDM) leadership will meet on December 8 in Islamabad to deliberate on political options including resignations from assemblies, conducting long march or holding negotiations with the government.

Recommendations in this regard have been summoned from Pakistan Muslim League-Nawaz (PML-N), Pakistan Peoples Party (PPP) and other members ahead of PDM’s Lahore rally.

On the other hand, PML-N senior leader Rana Sanaullah said people will express solidarity with PDM at full house ground of Minar-e-Pakistan. He said the opposition will send Prime Minister Imran Khan packing.

PML-N will resign from assemblies if PDM takes the decision, Rana Sanaullah added.

He said, “The incumbent government’s blind political revenge is still ongoing. I was first accused of owning property worth two billion rupees in Australia. Fake case was lodged against me.

“Drug peddlers were brought from Faisalabad to testify against me but the government did not find any witness against me despite all the pressure.”