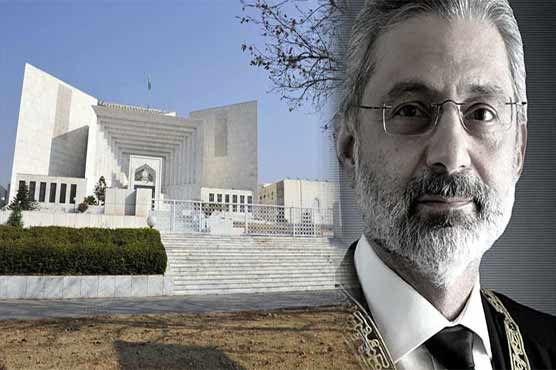 As per details, a six member bench headed by Justice Umar Atta Bandial will take up the plea.

According to detailed verdict in Justice Qazi Faez Isa case, the top court nullified the presidential reference against Justice Isa besides ordering Inland Revenue Commissioner to issue a notice to the judge’s family members including his wife and children within seven days to seek details of his properties.

The reference, filed by the government in May last year, alleged that between 2011 and 2015, Isa acquired three London properties on lease in the name of his wife and children but did not disclose them in his wealth returns.

Isa denied the allegation, saying he was not a beneficial owner of the apartments, directly or indirectly. In a petition filed against the reference, he argued that the Asset Recovery Unit constituted by the government to investigate his family’s properties was illegal and operated without any legal standing, and therefore any actions taken by the unit against him and his family were also illegal and without legal effect. The petition said the names and property details of Isa’s family were gathered through illegal surveillance.

Isa’s wife gave her statement to the court via video link, in which she provided the money trail for the purchase of the three properties in London. The details of her accounts were available from the State Bank of Pakistan, she said.

The court instructed her to present the documents to the tax authorities.