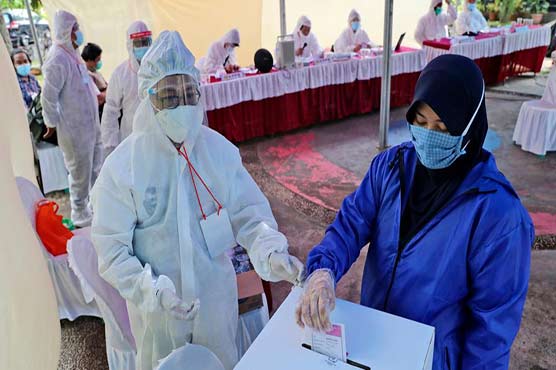 The archipelago of nearly 270 million — the world’s third-biggest democracy and fourth most populous nation — delayed the vote originally set for September as it struggled to contain soaring infection rates.

But the polls were rescheduled, even as critics warned over the risks amid widespread violations of virus protocols, including mask-wearing and social distancing.

“I’m scared many more people will be infected and die” after the polls, said Siti Zuhro, a political analyst at the Indonesian Institute of Sciences.

Hundreds of hopefuls are vying for 270 positions, including regional governors, district heads and mayors, including President Joko Widodo’s eldest son.

Voting was expected to wrap up around noon local time (0500 GMT).

More than 100 million Indonesians are registered to vote in the poll staffed by almost 2.7 million election workers, some of whom were tasked with taking ballot boxes to hospitalised Covid patients.

At least five election candidates have reportedly died so far and more than 1,000 election agency staff were infected ahead of voting day.

More than 580,000 Indonesians have been confirmed as having contracted the illness while the death toll stands at 18,000.

But the true scale of the crisis is widely believed to be much bigger, as testing rates are relatively low.

Infections could skyrocket above one million after polling day, warned Hermawan Saputra at the Indonesian Public Health Experts’ Association.

“The most worrying thing is that it won’t be just young, healthy people casting their votes, but also the elderly, pregnant women and sick people — they’re all at high risk,” he said.

“The public service announcements and health protocols aren’t enough. Health is being trumped by political demands and that’s very concerning. It’s not worth it.”

In the midst of the pandemic, voters have also had little chance to interact with candidates or understand their platforms, dealing a blow to a democracy that rose from the ashes of the Suharto dictatorship two decades ago, analysts said.

“The quality of the campaign has declined because of limited interaction between voters and candidates,” said Titi Anggraini, an analyst at the Association for Elections and Democracy.

“Holding regional elections during the pandemic is highly risky and costs a lot of money. It’s such a waste.”

Widodo’s son Gibran Rakabuming Raka, 33, is running for mayor of Solo city in Central Java, where his father, a former furniture seller better known as Jokowi, started in politics.

Jokowi’s son-in-law is also vying for office, stirring questions about whether Indonesia’s leader is trying to create a political dynasty more than a year into his second and final term.

Meanwhile, Islamist parties are looking to score big gains in the world’s biggest Muslim-majority nation as they ride a tide of rising religious conservatism.

US envoy ‘concerned’ about religious freedom in France