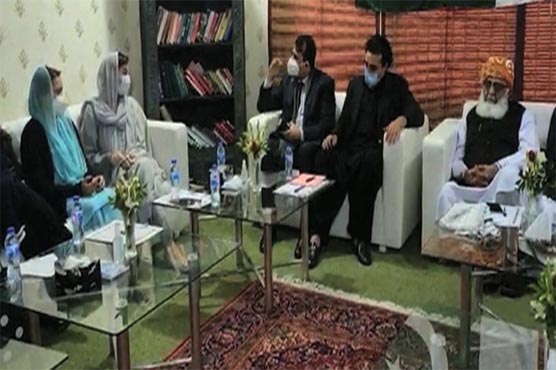 ISLAMABAD (City News) – Meeting of leadership of opposition parties is underway at residence of Maulana Fazal-ur-Rehman in federal capital to discuss future strategy of anti-government movement.

The top leadership of the alliance also met on December 8 to discuss future plan of action. Addressing media after the meeting, Maulana Fazlur Rehman, head of Pakistan Democratic Movement (PDM) said that by December 31, all members of the National and Provincial Assemblies would submit their resignations to their respective party leaders.

He said that the Lahore rally on December 13 will be historic and will serve as the last nail in the government’s coffin. If any attempt is made to disrupt the rally, it will be repulsed strongly than Multan, he warned

Rejecting the invitation of negotiation by the government, Maulana Fazlur Rehman said that the government is on the ropes, and only needs a final push. Today, the fake Prime Minister offered to have dialogue but he is undeserving of any dialogue, he said