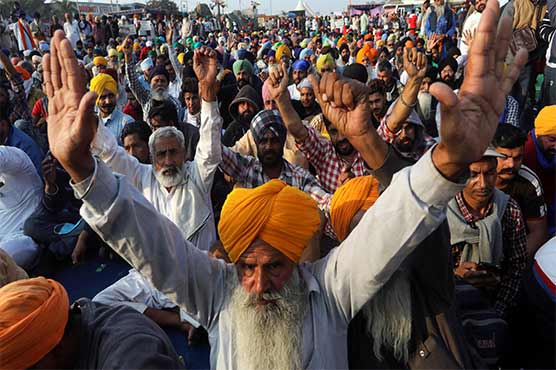 Indian farmers and police in road showdowns as protests worsen

Police deployed in large numbers stopped groups of hundreds of farmers from blocking the main highways from Delhi to the northern cities of Agra — the home of the Taj Mahal — and Jaipur.

Some farmers were detained on the expressway to Agra while other groups took over at least two toll booths and let cars and trucks pass without paying.

Thousands of farmers have already blocked two key roads into Delhi and tried to take over more Saturday but were again stopped by police who put up security cordons.

Farmers squatted in the service lane at Ghazipur on the edge of Delhi chanting slogans against the right wing government.

Farmers’ leaders and ministers have held several rounds of talks but they have broken down without agreement.

Agriculture unions want three laws which allow farmers to sell their produce on free markets to be repealed and a decades-old guaranteed minimum price system to be maintained.

The government has said it is only ready to make some amendments.

Food and Consumer Affairs Minister Piyush Goyal said Friday that the protests had been hijacked by “Maoist elements” but Prime Minister Narendra Modi sought to reassure farmers that the changes would boost their incomes.

“Reforms will help draw investment in the agriculture sector and benefit farmers,” he told an industry body on Saturday.

Economists say reforms are needed in the rural sector which provides jobs for about 70 percent of the 1.3 billion population but only contributes about 15 percent of the $2.7-trillion economy.

Farmers leaders say the reforms will only benefit big corporations who will be allowed to buy produce.

Their protest has been backed by some Indian diaspora communities in Britain, Canada and other countries who have staged their own protests.

17 injured in blast outside police station in Rawalpindi

Four stabbed and one shot after pro-Trump rallies