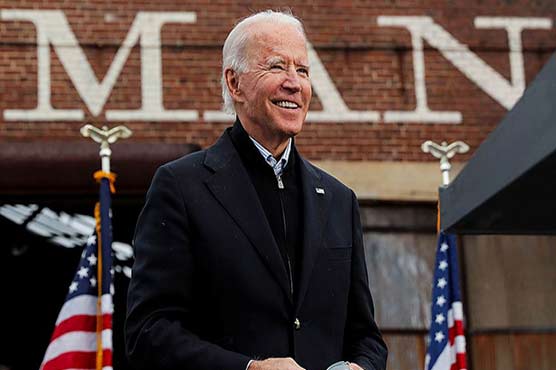 ATLANTA (Reuters) – Hours after speaking with Republican Senator Mitch McConnell and vowing to try to work together, President-elect Joe Biden urged Georgians on Tuesday to oust McConnell as majority leader by electing the two Democratic candidates in Jan. 5 Senate runoffs.

In a speech that marked his return to the campaign trail a day after the Electoral College confirmed his Nov. 3 election victory, Biden, a Democrat, laid out the stakes of the twin contests in no uncertain terms, warning that leaving the Senate in Republican hands could threaten much of his policy agenda.

“Are you ready to vote for two senators who know how to say yes and not just no?” Biden told an Atlanta drive-in rally, where attendees remained in their cars because of the coronavirus pandemic.

Democrats Raphael Warnock and Jon Ossoff are challenging Republican incumbents Kelly Loeffler and David Perdue, respectively. A Democratic sweep would give the party control of both chambers of Congress as well as the White House, while even one Republican win would allow McConnell to block many of Biden’s legislative goals.

Earlier on Tuesday, McConnell broke with Republican President Donald Trump and congratulated Biden and Vice President-elect Kamala Harris for the first time from the Senate floor. Trump has refused to concede, even as his myriad efforts to overturn the results have met with failure.

McConnell and his top deputies pressed other Senate Republicans not to join with any House Republicans who may object to the election outcome when Congress meets on Jan. 6 to ratify the decision.

Any such effort to challenge the results is all but certain to fail since it would require approval by both chambers, including the Democratic-controlled House of Representatives

Biden told reporters he and McConnell agreed to meet soon to discuss potential areas of cooperation.

During the campaign event, he made clear, however, the limits of that partnership, telling Georgians a Democratic Senate was necessary to make progress on coronavirus relief, funding for testing and vaccine distribution, aid to state and local governments, climate change and criminal justice.

He also attacked Loeffler and Perdue for embracing a lawsuit filed by Texas and supported by Trump that sought to invalidate the election results in Georgia and three other states that went for Biden. The U.S. Supreme Court summarily dismissed the case on Friday.

“They fully embraced nullifying nearly 5 million Georgia votes,” Biden said. “Maybe they think they represent Texas. Well if you want to do the bidding of Texas, you should be running in Texas, not Georgia.”

Biden was congratulated on Tuesday by Russian President Vladimir Putin, a favorite of Trump’s, and Mexican President Andrés Manuel López Obrador, both of whom had held off on acknowledging Biden’s victory.

Despite Trump’s attacks, Biden has pressed ahead with building his Cabinet, with word of more picks emerging on Tuesday.

He was expected to nominate former Michigan Governor Jennifer Granholm, 61, who was the state’s first female governor, as his secretary of energy, according to two people familiar with the decision.

The president-elect selected Pete Buttigieg, his former rival for the Democratic presidential nomination, to lead the U.S. Transportation Department, according to three people familiar with the matter.

Buttigieg, 38, the former mayor of South Bend, Indiana, would be the first openly LGBTQ Cabinet secretary approved by the Senate.

U.S. Representative Deb Haaland, 60, of New Mexico, is Biden’s leading choice to head the Interior Department, according to three sources familiar with the proceedings, a selection that would make her the first Native American to lead a Cabinet agency if confirmed by the Senate.

ALL EYES ON GEORGIA

Biden’s narrow win in Georgia last month underscored the Southern state’s transformation from Republican stronghold to one of the country’s most competitive political battlegrounds.

Both parties have poured in resources ahead of the January runoff elections. Biden’s trip to Atlanta came nine days after Trump traveled to Georgia in support of the Republican senators.

More than 480,000 ballots were cast after the first full day of in-person early voting and mail voting, according to the U.S. Elections Project at the University of Florida.

Trump campaign spokesman Tim Murtaugh said in a statement that Warnock and Ossoff “represent the left-most fringe” of the Democratic Party and that Biden’s campaign appearance showed he was under the influence of the party’s left wing.

Both parties in Georgia face turnout challenges in the midst of the pandemic and without the polarizing Trump at the top of the ballot to turn out voters from his deeply loyal supporters, as well as from detractors with deep animosity toward him.