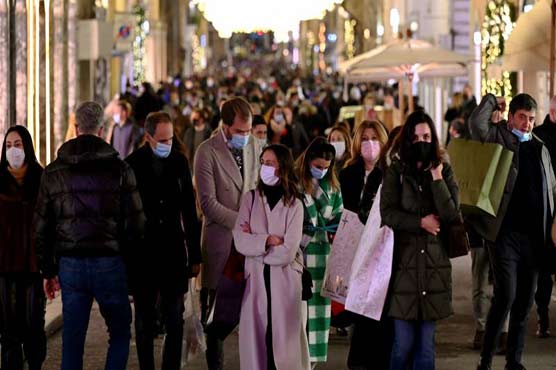 LONDON (AFP) – Millions of people in England and Italy will celebrate Christmas under tough new coronavirus restrictions as Europe battles a winter surge including a more infectious new strain.

Europe has become the first region in the world to pass 500,000 deaths from Covid-19 since the pandemic broke out a year ago, killing more than 1.6 million worldwide and pitching the global economy into turmoil.

In England, where a lockdown-weary population had been looking forward to a temporary five-day relaxation of virus restrictions over the festive period, British Prime Minister Boris Johnson instead announced a new “stay at home” order for London and southeast England — an area including around a third of the country’s population.

The move follows alarm at the speed at which the virus was spreading and a new strain that Johnson said was “up to 70 percent more transmissible”.

“It is with a very heavy heart I must tell you we cannot continue with Christmas as planned,” he told the nation in a televised briefing on Saturday.

“Alas when the facts change, you have to change your approach,” he said.

Residents in the affected areas will have to go into lockdown at least until December 30, Johnson said, tearing up earlier plans that would have allowed up to three households to mix.

Hours later the Netherlands banned all passenger flights from Britain after finding the first case of the new, more infectious virus strain that is circulating in the UK.

The ban is in effect from 0500 GMT Sunday until January 1.

The Netherlands is under a five-week lockdown until mid-January with schools and all non-essential shops closed to slow a surge in the virus.

Italy also announced a new regime of restrictions until January 6 that included limits on people leaving their homes more than once a day, closing non-essential shops, bars and restaurants and curbs on regional travel.

“It’s right that they prohibit departures after 20 December if it means travelling in safety,” Claudia Patrone, a 33-year-old lawyer, told AFP as she got off a train in Milan.

“I took the test before leaving, I stayed locked in my house, I didn’t see anyone. The measure is right if everyone respects the rules and guarantees safety.”

Europe — the epicentre of the pandemic earlier this year — is once again seeing growing cases with officials fearing an explosion in infections after the Christmas holidays as families gather.

A year after the pandemic first emerged in the Chinese city of Wuhan, the rapid rollout of vaccinations is now seen as the only effective way to end the crisis and the economically devastating lockdowns used to halt its spread.

Europe is expected to start a massive vaccination campaign after Christmas following the United States and Britain, which have begun giving jabs with an approved Pfizer-BioNTech shot, one of several leading candidates.

Russia and China have also started giving out jabs with their own domestically produced vaccines.

The United States on Friday authorised Moderna’s Covid-19 vaccine for emergency use, paving the way for millions of doses of a second jab to be shipped across the hardest-hit country in the world.

It is the first nation to authorise the two-dose regimen from Moderna, now the second vaccine to be deployed in a Western country after the one developed by Pfizer and BioNTech.

Millions of doses will start shipping out as early as this weekend from cold-storage sites outside Memphis and Louisville. More than 272,000 people have already been vaccinated with the Pfizer jab, the US Centers for Disease Control and Prevention said.

With the country now registering more than 2,500 deaths a day from Covid-19, senior officials including Vice President Mike Pence stepped up to receive early vaccinations on Friday.

Pence’s public inoculation was the most high-profile attempt yet at persuading vaccine-sceptic Americans to join a national effort to halt a pandemic that has infected more than 74 million worldwide.

President-elect Joe Biden, who will take office on January 20, announced he would get the vaccine, also in public, on Monday.

The summit is believed to be where French President Emmanuel Macron also caught the virus. Macron’s diagnosis on Thursday led to a slew of European leaders and French officials rushing into self-isolation.

In Australia, a cluster of cases on Sydney’s northern beaches grew to 38, with residents ordered to stay home from late Saturday other than for essential reasons.

“We’re hoping that will give us sufficient time to get on top of the virus so that we can then ease up for Christmas and the New Year,” she said.

In India the total number of cases climbed past 10 million on Saturday, the second highest in the world, although new infection rates appear to have fallen sharply in recent weeks.

Israel, meanwhile, set new coronavirus rules including a requirement for residents returning to the country from Sunday to self-isolate.