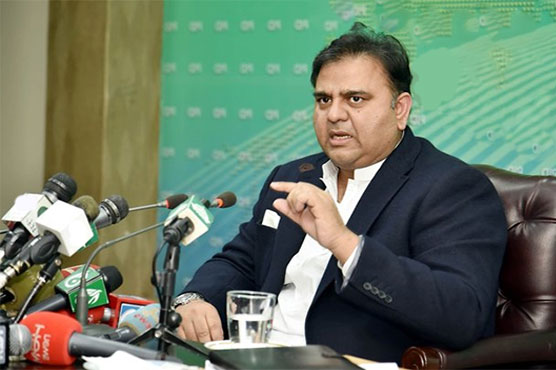 Premiership not an internship that could be offered to ‘children’: Fawad

ISLAMABAD (City News) – Federal Minister for Science and Technology Fawad Chaudhry while taking a jibe at Chairman of Pakistan People’s Party (PPP) Bilawal Bhutto Zardari and vice-president of Pakistan Muslim League-Nawaz (PML-N) Maryam Nawaz has said that the premiership is not an internship program that could be offered to children and some other arrangements will be made for them.

Addressing a press conference on Sunday, Fawad Chaudhry said that Maryam Nawaz has never worked in a kitchen and now she wants to become prime minister without any struggle while on the other hand PPP has become a party of only interior Sindh.

Reacting to Maryam’s criticism of hike in sugar prices, the minister said that country is in crisis because of two families as 45 percent of sugar businesses are owned by Sharif and Zardari families.

Fawad Chaudhry said that if Bilawal Bhutto wants to start long march, he should do it against Sindh government and Pakistan Tehreek-e-Insaf (PTI) will also become part of such movement.

The minister also said that PML-N claims to be fighting for democracy in the country but it does not practice the same in the party as Maryam Nawaz spent her entire life on her father’s money.

He further said that movement of the opposition alliance has collapsed as there are clear difference between PML-N and PPP.

The minister also said that Pakistan is in state of war and Ajmal Qadri revelations have exposed PML-N’s stance over relations with the state of Israel.

Premiership not an internship that could be offered to 'children': Fawad
0 113
Share FacebookTwitterWhatsAppPinterestEmailFacebook MessengerTelegram