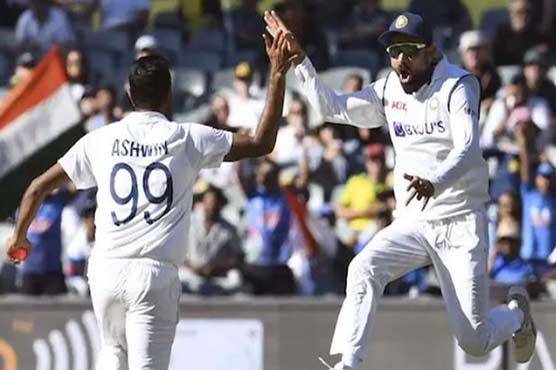 MELBOURNE (AFP) – A depleted Indian attack ripped through Australia’s top order to leave the world’s number one team with a slender two-run lead and in deep trouble Monday after day three of the second Test.

At stumps in Melbourne, Australia were 133 for six with Cameron Green on 17 and Pat Cummins 15 in their second innings as the visitors zeroed in on levelling the series after losing the first Test by eight wickets.

India are doing so with a depleted attack after Umesh Yadav pulled up in his fourth over with a calf problem, limping off the field.

It was a setback for India, who were already missing injured regulars Mohammed Shami and Ishant Sharma, but the remaining bowlers, led by Ravindra Jadeja (2-25) and Jasprit Bumrah (1-34), admirably picked up the slack.

India were all out for 326 in their first innings on the stroke of lunch, adding just 49 to their overnight 277 for five in reply to Australia’s 195.

Australia needed some of their big names to stand tall in the run chase. Opener Matthew Wade did well with a fighting 40 off 137 balls before being trapped lbw by the spin of Jadeja.

But Steve Smith, Marnus Labuschagne and Joe Burns all failed to step up.

Even if David Warner fails to recover from a groin strain for the next Test in Sydney, it will be hard for selectors to again justify picking Burns, with Marcus Harris among those waiting in the wings.

Labuschagne survived an lbw review on 24 but only scored four more before being caught by Rahane off a thick edge from Ravi Ashwin.

At the other end, the usually flamboyant Wade dug in but Smith again feel cheaply, bowled by Bumrah for eight with the ball just grazing his leg stump.

After Wade went, Travis Head was the last recognised batsman but he became a victim of paceman Mohammed Siraj on debut, slashing at a ball that he nicked to Mayank Agarwal.

Captain Tim Paine fell to Jadeja for one, leaving Green and Cummins to fight a rearguard action, knuckling down in a 34-run partnership to take the Test into a fourth day.

India started the day at a chilly Melbourne Cricket Ground in front of 24,995 socially-distanced fans with an 82-run advantage after taking charge Sunday with a gutsy response to their embarrassing 36 all out in Adelaide.

But Australia quickly made inroads.

Rahane, captain in place of Virat Kohli who has returned home for the birth of his first child, rode his luck on day two, when he was dropped on 73 and 104.

But after adding eight to his overnight 104, brilliant awareness from Labuschagne saw him run out.

Jadeja, back in the team after missing the first Test injured, dabbed Nathan Lyon to point and set off for a single as he looked to bring up his 50.

Rahane responded but wasn’t quick enough with Paine whipping off the bails after Labuschagne’s throw.

It ended a 121-run partnership and one of the 32-year-old’s most important innings, having come to the crease with India in trouble at 64 for three.

Jadeja brought up his 15th Test half-century before misjudging a Starc bouncer, holing out to Cummins, before Lyon and Josh Hazlewood mopped up the tail.