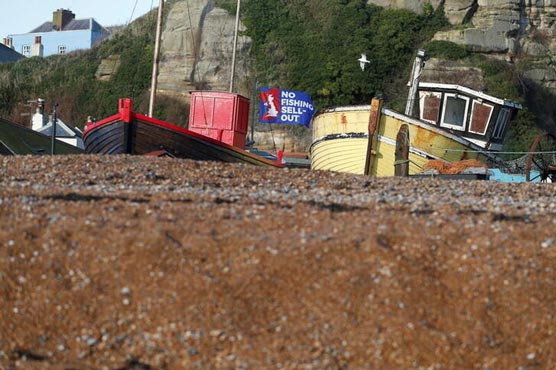 RAMSGATE, United Kingdom (AFP) – The fishermen of Ramsgate, a once thriving seaside town in southern England, had high hopes that Brexit would bring back the pre-EU glory days of teeming catches and lively fish auctions.

Britain had insisted it wanted to take back control of its waters while EU coastal states sought guarantees that their fleets could keep fishing in UK waters.

“We’ve been sold out by Boris!” fumed John Nichols in his Ramsgate cottage overlooking the English Channel, referring to Prime Minister Johnson.

Nichols, president of the Thanet Fishermen’s Association representing around 40 boats, said they were looking forward to a return to the days before frozen rectangles of cod could be imported from far away.

Instead, last week London and Brussels reached a compromise that will see European boats gradually relinquish 25 percent of their current quotas during a five-and-a-half-year transition period.

Nichols, 69, has been fighting for a “hard” Brexit since 2016, the year Britain voted to leave the EU in a referendum, with his group staging “Leave” flotillas on the Thames, sailing under the Houses of Parliament in London.

Now, “foreign vessels will continue to come in and out and take more fish than they did before,” Nichols said.

“The old saying says ‘be careful what you wish for’,” said the doyen of the group, 85-year-old Tom Brown, his cap pulled down to his eyebrows.

Brown said that “when it all started to go wrong” after Britain joined the European Union — then the European Economic Community — in 1973, he and his brother joined every protest, from strikes to blockades, to fight for their rights against European competition.

Brown even created his own modest fuel company, with profits going to fellow fishermen to help offset the losses.

And then, with global warming, the cod population began migrating northwards, and the British began importing their cod for fish and chips — a national staple — from Iceland.

Brown said that people in England no longer eat fresh fish, “only fish and chips”.

“It’s finished. People go to the supermarket. The young generation doesn’t like the smell of fish,” he said.

Without a local market, the fishermen of Kent depend entirely on exports. The fishmongers and fish auctions that were once a fixture of the seaside resort have long since disappeared.

All that is left is a wholesaler who loads trucks each morning with about 70 percent of the meagre overnight haul, mainly sole and crustaceans, to cross the Channel to the French port of Boulogne-sur-Mer.

On January 1, when Britain leaves the single market, the headache begins along with the heartache.

“We will assist them with all the papers,” Nichols said. “But the most difficult is the veterinary procedure for freshness. Bringing the customs guy for seven kilos (15 pounds) doesn’t make sense.”

As they turn their back on decades of partnership, through thick and thin, with French buyers, the Ramsgate fishermen are now hoping for a miracle from across the Atlantic.

“We’ve been approached by the Americans to send by plane to New York some high-value fish” such as sole, bass, brill and turbot, Nichols said.

But Brown was despondent.

“We were the greatest fishing nation, we had the best fishing grounds,” he sighed. “All gone.”

Pakistan receives support for 334 development projects from outside during…