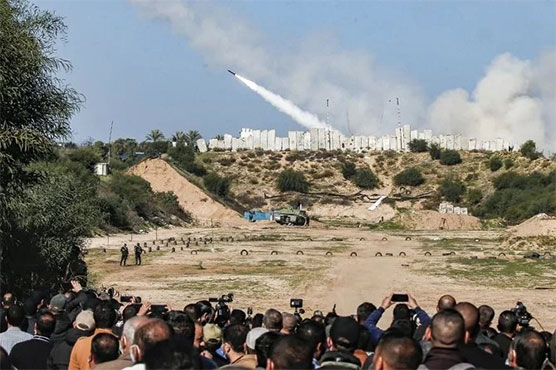 GAZA CITY (AFP) – Palestinian armed groups staged military exercises in Gaza on Tuesday, including firing rockets into the sea, to mark the anniversary of the start of the 2008 conflict with Israel.

The demonstrations were organised under Gaza s so-called Joint Command Room, which is made up of roughly a dozen armed groups, including the Hamas Islamists, who have controlled the enclave since 2007.

In addition to the volley of rockets fired into the Mediterranean Sea from platforms southwest of Gaza City, Palestinian fighters simulated various combat scenarios with Israeli troops, an AFP reporter said.

Before the drill started, a spokesman for Al-Quds Brigade forces, the armed wing of Islamic Jihad, told reporters the drills were aimed at preparing combatants for a future conflict with Israel.

Israel and Hamas have fought three wars since the Islamists took power in Gaza.

It ended with a ceasefire in January 2009, after 1,440 Palestinians and 13 Israelis were killed.

Tuesday s exercise, the first of its kind, will “strengthen the skills of combatants” and demonstrate the “unity” of Gaza s armed groups, said the Al-Quds Brigade spokesman, whose face was almost entirely covered by a traditional headscarf as he spoke.

Senior Hamas official Mushir al-Masri said in a statement that the drills proved Palestinians in Gaza had missiles capable of hitting Israel “in any coming battle”.

Israel, which said it carried out the weekend airstrikes in response to rocket fire from Gaza, denied that its missiles hit the hospital.

Gaza military affairs expert Ibrahim Habib told AFP that Hamas s military wing, the Qassam Brigade, wants to create more cohesion among Gaza-based fighters, but that the success of that effort is not guaranteed.

Different groups would have to merge to form “the nucleus of a Palestinian army”, Habib said.

Before the exercises, Hamas s interior ministry blocked access to the sea for civilians and closed a main road running the length of the strip.

According to Israeli and Palestinian media, Israel s army raised its alert level ahead of the drills.

The Israeli army did not immediately respond to a request for comment.

A fragile truce has broadly held in Gaza in recent years, despite flareups involving rocket fire from Gaza and retaliatory Israeli air strikes.

Poverty rates in the densely populated strip, which hovered around 50 percent before the novel coronavirus pandemic, are thought to have increased since Hamas imposed lockdown measures to limit transmission.

Russia, Turkey to develop military ties despite US sanctions