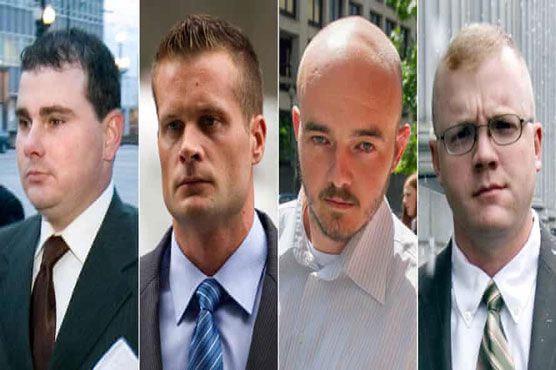 GENEVA (AFP) – US President Donald Trump s pardons of four Blackwater contractors convicted of killing civilians in a 2007 Baghdad massacre is a violation of US obligations under international law, UN experts said Wednesday.

“The Geneva Conventions oblige states to hold war criminals accountable for their crimes, even when they act as private security contractors,” Jelena Aparac, head of the UN working group on the use of mercenaries, said in a statement.

“These pardons violate US obligations under international law and more broadly undermine humanitarian law and human rights at a global level,” she said.

Trump granted pardons to the guards on December 22 among a slew of other controversial pardons before he leaves office next month.

The four were convicted of opening fire in Baghdad s crowded Nisur Square on September 16, 2007 in a bloody episode that caused an international scandal and heightened resentment of the American presence.

The shooting left at least 14 Iraqi civilians dead and 17 wounded while perpetuating the image of US security contractors run amok.

The Blackwater guards said they acted in self-defense in response to insurgent fire.

“Pardoning the Blackwater contractors is an affront to justice and to the victims of the Nisour Square massacre and their families,” Aparac added.

The working group, consisting of five independent experts who are appointed by the UN but who do not speak on behalf of the body, warned Wednesday that countries have an obligation to hold convicted war criminals to account.

“Pardons, amnesties, or any other forms of exculpation for war crimes open doors to future abuses when states contract private military and security companies for inherent state functions,” the statement said.

The working group voiced deep concern at the practice of permitting private security contractors to “operate with impunity in armed conflicts”.

This, they warned, could encourage countries to “circumvent their obligations under humanitarian law by increasingly outsourcing core military operations to the private sector.”

Nawaz Sharif’s passport will be canceled on Feb 16: Sheikh Rashid

AstraZeneca/Oxford Covid vaccine approved for use in UK