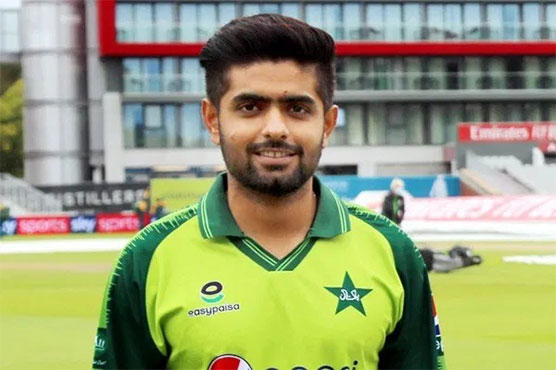 LAHORE (APP): Pakistan captain Babar Azam was named as the Most Valuable Cricketer of the Year following his stellar performances across all formats during the 2020 calendar year.

In addition to the most prestigious award, the 26-year-old was also adjudged the White-ball Cricketer of the Year after averaging 110.5 and 55.2 in the ODIs and T20Is, respectively. In the four Tests, Babar scored 338 runs at 67.6.

Mohammad Rizwan, the stand-in captain for the final Test of 2020 at Mount Maunganui against New Zealand, was declared Test Cricketer of the Year. In five Tests, he aggregated 302 runs, mostly in difficult situations, with four half-centuries at an average of 43.14. He also accounted for 12 batsmen behind the wickets.

Fawad Alam’s fighting and courageous 102 at Mount Maunganui, his first Test century in 11 years that made global headlines, was chosen as the Individual Performance of the Year by the independent jury, that comprised of highly respected and distinguished cricket personalities.

Just 17-year-old Test fast bowler Naseem Shah won the Emerging International Cricketer of the Year following his 20 wickets in eight Tests, including a hat-trick against Bangladesh that made him the youngest bowler to achieve the rare feat.

The Domestic Cricketer of the Year honours went to Khyber Pakhtunkhwa’s Kamran Ghulam after he became the only batsman in the ongoing first-class Quaid-e-Azam Trophy to complete 1,000 runs. He finished 19 innings of 10 round matches with 1,065 runs with four centuries and four half-centuries at an average of just under 60.

Rohail Nazir’s progression from the U19 level to Pakistan Shaheens’ captain has won him the Men’s Emerging Cricketer of the Year. In the period from 1 September 2019 to 31 December 2020, the 19-year-old featured in nine events, including the ACC U19, Emerging Asia Cup, HBL PSL 2020, Quaid-e-Azam Trophy 2019, ICC U19 Cricket World Cup 2020, two National T20 Cups and Pakistan Shaheens, and finished with 1,260 runs besides his 48 victims behind the wickets.

The match referees and six Cricket Associations captains voted Asif Yaqoob as the Umpire of the Year.

Pakistan men’s national cricket team’s gesture to visit the Bangladesh cricket team’s dressing room to thank them for their first visit to Pakistan in over a decade following a 2-0 T20I series win earned them the Spirit of Cricket award, while the independent jury* decided that the delivery of a highly successful and smooth HBL PSL 2020 in Pakistan, first-ever PSL event to be staged in front of home crowds, as the Corporate Achievement of the Year.

The winners will be presented with specially designed trophies during the upcoming home series against South Africa.

Below are the category-wise winners with their reactions:

Umpire of the Year – Asif Yaqoob

Asif Yaqoob said “I feel honoured to have been voted as the Umpire of the Year by my colleagues and the six captains. Umpiring is my passion and I take a lot of pride in what I do, but to be formally recognised by my peers is something to be really proud of. I want to thank my family, all the match officials and players for considering me worthy of this achievement and I look forward to working with them in future.”

Facts – Scored 145 runs and took 17 wickets in the National Women’s U19, National One-day and two National Women’s T20 Cups in the period from 1 September 2019 to 31 December 2020 Fatima Sana said “After thanking God Almighty, I want to thank my family as well as Bismah Maroof and Sana Mir for their encouragement and support. This award will motivate me to work harder and help Pakistan women’s national cricket team at the global stage.”

Facts – Scored 1,260 runs and dismissed 48 batsmen behind the wickets in the ACC U19, Emerging Asia Cup, HBL PSL 2020, Quaid-e-Azam Trophy 2019, ICC U19 Cricket World Cup 2020, National T20 Cup and Pakistan Shaheens in the period from 1 September 2019 to 31 December 2020
Rohail Nazir said “I am delighted that my progression as a cricketer has been recognised through this award.

This means a lot to me. I have set my target at representing Pakistan at the highest level and will continue to work hard to not only achieve that target but also match the outstanding performances of my predecessors through a long, consistent and successful career.”

Pakistan players visiting Bangladesh dressing room after their 2-0 win in T20I series. This was Bangladesh men’s cricket team’s first visit to Pakistan in over a decade.

Facts – Took 20 wickets in eight Tests, including a hat-trick against Bangladesh that made him the youngest Test bowler to take three wickets in three successive deliveries.

Nasim Shah said “What I have achieved today is only through the prayers of my late mother and, as such, I will dedicate this award to her. When I go out there to play for Pakistan, I have the belief and confidence that she is behind me and continuously supporting and encouraging me go an extra yard and perform for my country.

“I am thankful to the fans and my team-mates for this recognition so early in my career. I remain motivated and committed to doing my very best for the team and this award will go a long way in helping me contribute to the team’s objectives and targets.”

Facts – 34 matches held in Karachi, Lahore, Multan and Rawalpindi in two phases. From 20 February to 15 March, 30 matches were held and attended by around 600,000 spectators before the event was postponed due to the Covid-19 outbreak. The remaining four play-offs were held in Karachi from 14-17 November in Karachi. Karachi Kings won their maiden title when they defeated Lahore Qalandars by five wickets.

Facts – Scored 1,065 runs Khyber Pakhtunkhwa in 19 innings of 10 the Quaid-e-Azam Trophy matches with four centuries and four half-centuries at an average of just under 60.

Kamran Ghulam said “My dream has always been to represent Pakistan and I think I have taken a step forward in cherishing that dream. There have been a number of outstanding performers throughout the year in the difficult Covid-19 conditions but to have been identified as the Domestic Cricketer of the Year is extremely satisfying, not only for me but for all those who have contributed in my growth and development. I look forward to using this award as a launching pad for future challenges.”

Facts – Scored 267 runs and took five wickets in the two National Men’s T20 Cups and the ICC Women’s T20 World Cup in the period from 1 January 2020 to 31 December 2020 Aliya Riaz said: “This award means a lot to me and I will like to contribute to my team’s success in the upcoming seasons by further improving my performances.”

Fawad Alam said “I am pleased to have been rewarded with the Individual Performance of the Year Award. This reward is recognition of my continued hard work and efforts, and will only contribute in further enhancing my confidence. Nothing comes easy in life, all one can do is to keeping work hard, staying focused on the targets and wait for the opportunity.”

Facts – Scored 221 runs in three ODIs at 110 with one century and one half-century, and scored 276 runs in eight T20Is at 55.2 with four half-centuries Test Cricketer of the Year – Mohammad Rizwan Facts – Scored 302 runs in five Tests with four half-centuries at 43.14 and dismissed 12 batsmen behind the wickets
Mohammad Rizwan said “There is nothing like representing Pakistan at a global stage but the task is only accomplished if you can contribute to the team’s cause.

In this background, I am delighted to have won the Test Cricketer of the Year award, even though there were other strong contenders who I have huge respect for.

“I want to thank my family and teammates and all those who have backed and supported me in this journey, particularly those who believed and stood by me even when I was unable to break into the side despite being a member of the team.

“I particularly enjoyed my performances in England as these came in difficult situations and against some of the finest exponents of red cricket ball. I am delighted that I was able to carry the confidence I got by performing in England by scoring two half-centuries in the series.”

Most Valuable Cricketer of the Year – Babar Azam

Facts – Scored 338 runs in four Tests at 67.6, 221 runs in three ODIs at 110 and 276 runs in eight T20Is at 55.2
Babar Azam said “I am truly humbled to have been awarded with the White-ball and Most Valuable Cricketer of the Year awards by the independent jury in what has been a difficult year for all professional athletes.

Without the support of my teammates and family, this would not have been possible and, as such, I owe big time to all of them for my successes in 2020 and hope they will continue to support me in years to come.

“Captaining Pakistan at home was a huge moment for me though without crowds it took a bit of the gloss of that honour. I think the cricket I played in England was some of the best.

England is never an easy place to play due to the conditions and the players they boast, but to go out there and perform gave me the satisfaction and encouragement that I can compete against the best and help my side to do better.

“I am disappointed to miss the three T20Is and the first Test in New Zealand as I was determined and motivated to perform against what is a really good New Zealand team and managed outstandingly by Kane Williamson.

“I will reflect on 2020 will a lot of satisfaction and hopefully the honour and rewards I have won will only contribute in me working harder to further enhance and improve my performances as well as my young and talented team.”