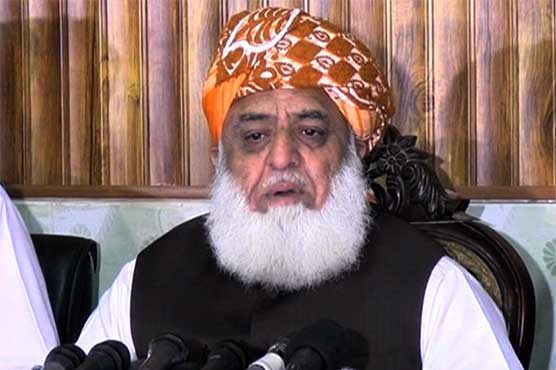 LAHORE (City News) – Head of Pakistan Democratic Movement (PDM) Maulana Fazl-ur-Rehman has said that decision regarding resignations from assemblies and long march towards federal capital will be taken after January 31.

Talking to media persons, JUI-F chief said that war has been declared against the incumbent government and all parties of alliance are working together to send government packing.

He also said that he will raise voice against government which sold Kashmir and announced to observe Kashmir Solidarity Day on February 5.

JUI-F chief said they will also raise voice for Palestinians and an anti-Israel rally will be held in Karachi on January 21.

On the other hand, PML-N leader Rana Sanaullah has said that decision about resignations will be taken after decisive long march.

The PML-N leader talked to media and said Pakistan Peoples Party (PPP) has presented its stance pertaining to the matter of resignations according to the present situation with argument.

Rana Sanaullah said that the intensity of the government’s politics of revenge is increasing with every passing day and the judiciary should intervene and stop this practice. He affirmed that the government will find no evidences of corruption by PML-N.

He told that PDM will hold next meeting on February 1 to decide whether to stage a sit-in in Islamabad or Rawalpindi.

Work being done rapidly on vision of equal progress of all cities: CM Buzdar