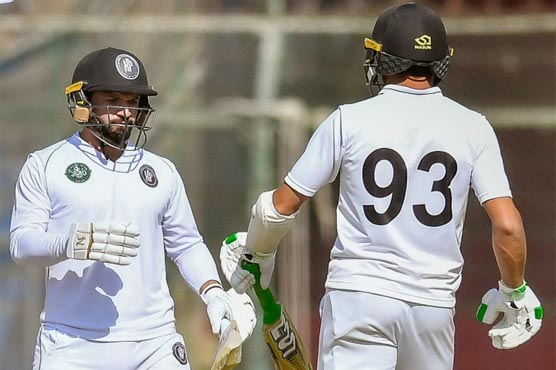 Central Punjab, however fought back in the closing stages of the day, taking three wickets with the second new-ball as Khyber Pakhtunkhwa were placed at 285 for seven when stumps were drawn. Off-spinner Sajid Khan (6) was dismissed by Central Punjab captain Hasan Ali on what turned out to be the last ball of the day, a total of 89.2 overs were bowled on day-one.

Left-handed opener Israrullah took the attack to the Central Punjab bowlers in his stroke filled 61 off 69 balls (10 fours), he, however failed to convert his 29th first-class half-century into a century as off-spinner Qasim Akram had him caught behind with the total at 95 in the 22nd over of the extended three-hour long first session of play.

The pair of inform Kamran Ghulam and Adil Amin took Khyber Pakhtunkhwa to lunch at 166 for three. Kamran, the leading run scorer of the season, continued his rich vein of form and posted his fifth half-century of the tournament. He was sent packing by left-arm-spinner Ahmed Safi Abdullah for 76 off 129 balls. Kamran’s innings included 15 fours. Kamran added 132 runs for the fourth-wicket with Adil Amin.

The right-handed Adil provided the perfect foil to Kamran and took his score to 75 in a 39-run fifth-wicket stand with Zohaib Khan before he was bowled by Hasan with the new ball. Adil hit 10 fours in his 202-ball stay at the wicket.

Bilawal Iqbal then dismissed Khalid (3) lbw. Waqas and Hasan have so far taken two wickets each for Central Punjab.