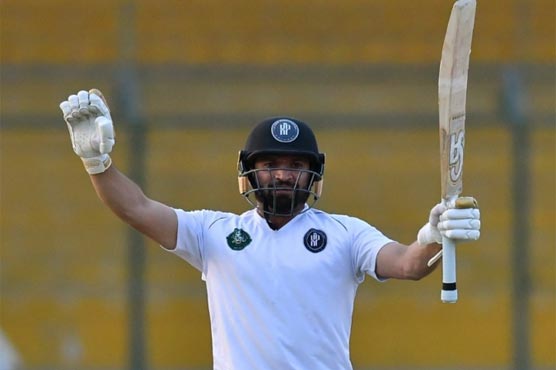 KARACHI (City News) – The PCB Domestic Cricketer of the Year, Khyber Pakhtunkhwa’s Kamran Ghulam created history by becoming the highest run-scorer in a single season of the prestigious Quaid-e-Azam Trophy on day three of the tournament’s 2020-21 five-day first-class final against Central Punjab.

This was Kamran’s 20th innings of the season, after setting the highest run’s record, the right-hander went on to post his fifth century of the tournament, reaching the landmark off 196 balls.

When stumps were drawn for the day, Khyber Pakhtunkhwa had attained a position of considerable strength by reaching 243 for five, an overall lead of 286.

Khyber Pakhtunkhwa started their second innings with a 43-run lead, they were rocked back at the start with the loss of opener Fakhar Zaman (4) and Zohaib Khan (5) with the score at 33 in the 14th over.

Israrullah who contributed 61 in the first innings posted his second half-century of the match scoring 63 off 97 balls (nine fours, one six) before he was dismissed stumped off Qasim Akram. Rehan Afridi was run out for one with the score at 204 and KP 247 runs ahead.

Kamran joined hands with Adil Amin in an 83-run fourth-wicket partnership which was broken by Waqas Maqsood who had Adil caught for 34 (88 balls, four fours).

Earlier in the day, resuming at the overnight score of 212 for eight, Central Punjab declared their innings after reaching 257 for nine in 83 overs. After crossing the 250-run mark, Central Punjab gathered a crucial second batting point which equalled their first innings points tally with Khyber Pakhtunkhwa to six points which prompted a declaration.

Qasim posted the third half-century of his maiden first-class season, the right-hander scored 60 off 102 balls with the help of nine fours. He added 37 vital runs for the 10th wicket with Waqas Maqsood who hit a four and two sixes in his unbeaten 20 off 14 balls.

Fast bowler Irfanullah Shah finished with four wickets for 73 while Khyber Pakhtunkhwa captain Khalid Usman finished with three for 32 with his left-arm-spin.

On the historic feat, Kamran Ghulam, while speaking to pcb.com.pk, said: “This has been an extraordinary season for me and I am grateful to my teammates and my coaches who have played an integral role in my success this season.

“I also want to thank my family as this would not have been possible without their sacrifices in this extraordinary season which has kept the players away from their houses for the past four months.

“This season has given me a lot of confidence and now I have more faith in my abilities than before. Having a legend like Abdul Razzaq as a coach has helped me in identifying my strengths and now my aim is to build on them.

“My aim is now to build on this and represent Pakistan at the highest level.”

In his seven-year-long first-class career, which began with the 2013-14 season, Kamran has scored 2409 runs, which includes nine centuries and has taken 25 wickets.