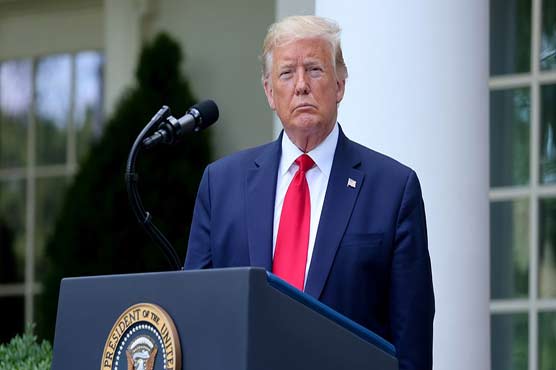 Trump calls on Georgia runoff voters to ‘save’ America

DALTON (AFP) – President Donald Trump on Monday implored Georgians to “save” America and re-elect Republicans in two runoffs that will determine US Senate control and could decisively impact the start of Joe Biden’s White House tenure.

“Our country’s depending on you. The whole world is watching the people of Georgia tomorrow,” Trump, who still refuses to concede defeat in the presidential election barely two weeks before he leaves office, told a raucous crowd in the town of Dalton.

Tuesday’s twin Senate runoffs are “your last chance to save the America that we love,” the president said. “If you don’t show up, the radical Democrats will win.”

Georgia has not elected a Democrat to the Senate in 20 years. But if Jon Ossoff, a 33-year-old documentary producer, and pastor Raphael Warnock, 51, both win, Democrats will control the Senate, handing Biden all levers of political power in Washington.

Trump, still scheming to reverse his election defeat and lashing out at Republicans who oppose his efforts, jetted to Georgia amid a scandal over his blatant attempt to pressure state officials here to reverse the certified vote and hand him victory.

While he did repeatedly urge supporters to vote Tuesday for Republican Senate incumbents Kelly Loeffler and David Perdue, both wealthy businesspeople-turned-politicians, he also embraced the politics of grievance.

In his 81-minute speech he rattled off a long list of complaints about “massive” voting irregularities in Georgia and other swing states where he was defeated.

“There’s no way we lost Georgia,” he said to a loud cheer from supporters, most of whom were maskless and appeared unconcerned about a lack of social distancing due to the coronavirus.

“They’re not taking this White House,” he said of Biden’s Democrats. “We’re going to fight like hell!”

Biden, who takes over the White House on January 20, also flew Monday to Georgia, stumping in the capital Atlanta in a more subdued event for Warnock and Ossoff.

“It’s a new year, and tomorrow can be a new day for Atlanta, for Georgia and for America,” the 78-year-old told cheering voters at a drive-in rally.

He attacked Trump for relentlessly “whining” about unproven election fraud instead of improving the nation’s coronavirus pandemic response.

“I don’t know why he still wants the job, he doesn’t want to do the work,” Biden said.

Georgia has been reliably Republican but Biden beat Trump by nearly 12,000 votes in the Peach State in November’s election, and polls have the Senate races neck-and-neck.

Republicans hold 50 seats in the 100-member Senate. A victory in just one runoff would give them a majority — and the ability to thwart Biden’s agenda.

A Democratic sweep would result in a 50-50 split, with Democrats holding the tie-breaking vote in incoming Vice President Kamala Harris.

Perdue, though, is in quarantine after contact with someone who tested positive for Covid-19, and he dialed in virtually to say Georgians need to “hold the line.”

The Georgia rallies come a day after The Washington Post published the shocking recording of a telephone call between Trump and Georgia Secretary of State Brad Raffensperger.

On the tape, Trump tells Raffensperger he wants to “find 11,780 votes” — one more than Biden’s margin of victory in Georgia — and makes vague threats that Raffensperger could face “a big risk” if he fails to do so.

Surprisingly, Biden made no mention of the explosive recording Monday, but he did take a swipe Trump’s efforts to overturn the election results.

“Politicians cannot assert, seize or take power,” Biden said. “Power is granted by the American people and we cannot give that up.”

Georgia’s runoffs are being held the day before Congress certifies the Electoral College votes that determine the White House winner.

Certification is usually a formality but dozens of House Republicans and 12 Senate Republicans — including Loeffler — have signaled they will raise objections.

At least one House and one Senate member needs to lodge an objection to certification to send it to the two chambers for debate and votes.

The votes would be doomed to failure, however, in the Democratic-controlled House and the Republican-majority Senate, where a number of Republican senators have said they will not contest Biden’s victory.

In Georgia Trump, who has savaged Republicans who have refused to endorse his baseless claims, noted Vice President Mike Pence’s role of presiding over the join congressional certification session Wednesday, and his tone turned ominous.

“I hope that our great vice president comes through for us,” Trump said. “Though if he doesn’t come through, I won’t like him quite as much.”