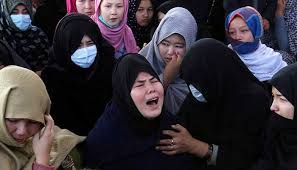 QUETTA (City News) – Members of Hazara community are expected to end sit-in at Quetta’s Western Bypass after reaching agreement with the government, sources said on Thursday.

As per sources, government has accepted demands of the Hazara community members and families of ten slain miners, who were shot dead in Mach area of Kachi district on Sunday and announcement regarding ending the protest will be made soon.

It is to be mentioned here that thousands of Hazara community members had earlier vowed that their demonstration will continue until Prime Minister Imran Khan’s arrival, and dialogue will now only be held with the premier.

All previous attempts by the federal and provincial government to persuade the protesting Hazara community members to call off sit-in and bury their loved ones have been failed.

Addressing a press conference along with Ali Zaidi and Zulfi Bukhari, Jam Kamal urged the protestors to not make burial of slain coal miners conditional with arrival of PM Imran Khan.

He said that government worked hard in past 2.5 years to establish sense of brotherhood in the province and law and order situation remained relatively better in Balochistan; however, enemies of country don’t like this unity between people and want to spread unrest in the country.

Agha Raza, one of the organizers of the sit-in said that the sit-in was not organized by anyone, adding, “We are the voice of the people and the sit-in was called at the request of the families of the slain miners.”

He said that the families of slain miners were voluntarily sitting with the bodies and vowed to continue their sit-in until Prime Minister Imran Khan visits Quetta and make an announcement.

On the occasion, Ali Zaidi said that enemies of state are involved in such activities as people like Indian spy Kulbhushan Yadav were also arrested from here.

It is to be noted here that some armed men took the coal miners belonging to Hazara community to nearby mountains in Machh and opened fire and killed 10 of them. After news of the incident broke, security agencies arrived at the coal mine and cordoned off the area and collected evidences.

We are focused on achieving targets: Mohammed Mian Soomro