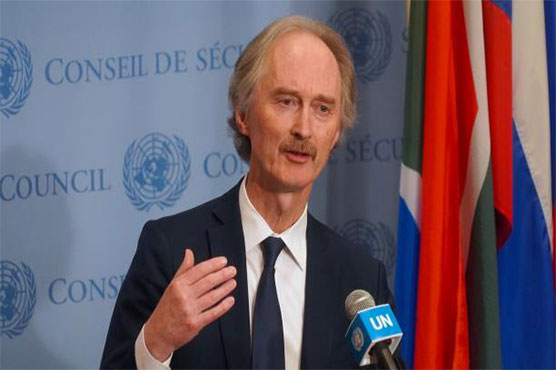 GENEVA (AFP) – Talks on a new constitution for Syria hit a brick wall this week, with the United Nations mediator concluding Friday: “We can t continue like this”.

The fifth round of discussions between 15 representatives each from President Bashar al-Assad s government, the opposition and civil society, staged all week at the UN in Geneva, concluded with little to no progress.

“I told the 45 members of the drafting body that we can t continue like this. That the week has been a disappointment,” said UN envoy Geir Pedersen, voicing his frustration.

“I set out a few things I thought we should be able to achieve before we started this meeting — and I m afraid we did not.”

The Syrian Constitutional Committee (SCC) was created in September 2019 and first convened a month later.

The tentative discussions are aimed at rewriting the war-torn country s constitution. It is hoped the talks could pave the way towards a broader political process.

He then made his own proposals, which were accepted by the opposition — but also rejected by the government.

Pedersen s plan was a mechanism for finding areas of agreement and driving those forward into a drafting process.

“We need this mechanism in place,” the Norwegian diplomat told a press conference.

“This is not a debating committee. You can continue debating forever.

“You need to move this in a manner where the members themselves start to identify areas where they agree or disagree, and then move into the drafting phase.”

He added: “We cannot continue to meet if we do not change this.”

Pedersen is set to brief the UN Security Council on February 9.

Syria s civil war erupted in 2011 after the violent repression of protests, quickly spiralling into a complex conflict that pulled in numerous actors, including jihadist groups and foreign powers.

More than 387,000 people have been killed, and more than half of Syria s pre-war population of 20 million have been forced to flee their homes.

Throughout the civil war, the UN has been striving to nurture a political resolution.

“More than a year has passed since the establishment of the SCC and we have held only five rounds of meetings, without being able to start to fulfil our mandate — which is to draft the new constitution of Syria,” he told reporters.

“Stopping the humanitarian tragedy in Syria is a duty for us all.

“Procrastinating under some pretext is something unacceptable.”

Ahmad Kuzbari, the head of the government delegation, insisted they were not out to block progress.

“I cannot draft a principle before having discussed a principle,” he said.

“As for blaming us for stalling and for obstructing the work of the committee, well, we re used to that. No matter what we do we will always be blamed for that.

“We shall continue to engage positively and actively.”