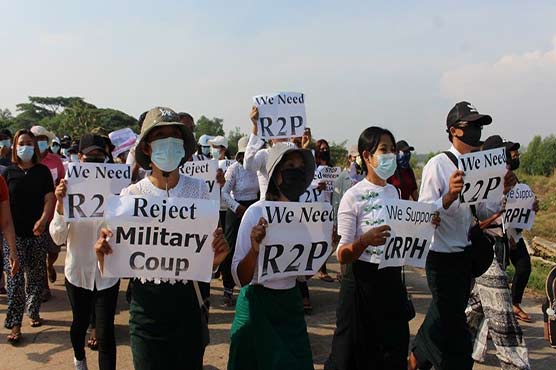 (Reuters) – More than 125,000 school teachers in Myanmar have been suspended by the military authorities for joining a civil disobedience movement to oppose the military coup in February, an official of the Myanmar Teachers  Federation said.

The suspensions have come days before the start of a new school year, which some teachers and parents are boycotting as part of the campaign that has paralysed the country since the coup cut short a decade of democratic reforms.

A total of 125,900 school teachers had been suspended as of Saturday (May 22), said the official of the teachers  federation, who declined to give his name for fear of reprisals. He is already on the junta s wanted list on charges of inciting disaffection.

Myanmar had 430,000 school teachers according to the most recent data, from two years ago.

“These are just statements to threaten people to come back to work. If they actually fire this many people, the whole system will stop,” said the official, who is also a teacher. He said he had been told that the charges he faces would be dropped if he returns.

Reuters was unable to reach a junta spokesman or the education ministry for comment. The state-run Global New Light of Myanmar newspaper has called on teachers and students to return to schools to get the education system started again.

The disruption at schools echoes that in the health sector and across government and private business since the Southeast Asian country was plunged into chaos by the coup and the arrest of elected leader Aung San Suu Kyi.

Around 19,500 university staff have also been suspended, according to the teachers  group.

Registrations begin next week for the school term that starts in June, but some parents said they also plan to keep their children out of school.

“I am not going to enrol my daughter because I don t want to give her education from military dictatorship. I also worry about her safety,” said 42-year-old Myint, whose daughter is 14.

Students, who have been at the forefront of daily protests at which hundreds of people have been killed by security forces, also said they planned to boycott classes.

“I will only go back to school if we get back democracy,” said Lwin, 18.

Myanmar s education system was already one of the poorest in the region – and ranked 92 of 93 countries in a global survey last year.

Even under the leadership of Aung San Suu Kyi, who had championed education, spending was below 2 per cent of gross domestic product. That was one of the lowest rates in the world, according to World Bank figures.

A National Unity Government, set up underground by opponents of the junta, said it would do all it could to support the teachers and students itself – calling on foreign donors to stop funding the junta-controlled education ministry.

“We will work with Myanmar s educators who are refusing to support the cruel military,” Sasa, who goes by one name and is a spokesman for the national unity government, said in an email to Reuters. “These great teachers and brave teachers will never be left behind.”