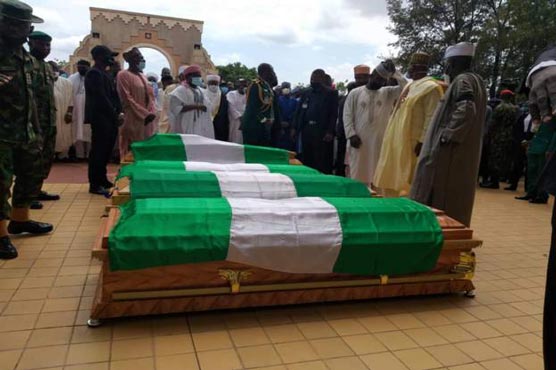 ABUJA (AFP) – Nigeria’s top-ranking army commander Lieutenant General Ibrahim Attahiru was laid to rest in the capital Abuja on Saturday, a day after he and 10 other officers died when their plane crashed in bad weather.

It was the third military air disaster this year and the army posted videos on social networks of the service attended by political and military leaders at the national mosque.

Army chief of staff Attahiru was only appointed by President Muhammadu Buhari last January in a shakeup of the senior command to better fight surging violence and a more than decade-long jihadist insurgency.

But the president, who offered his condolences just hours after the crash in the northern state of Kaduna, did not attend the funeral, an absence widely criticised on social media.

Attahiru died as news emerged that Nigeria’s Boko Haram jihadist leader Abubakar Shekau had himself been seriously wounded or possibly killed after clashes with a rival Islamic State-allied faction.

The aircraft went down trying to land at the Kaduna International Airport “due to inclement weather”, the armed forces said.

Nigeria’s military has been battling an Islamist insurgency in the northeast since 2009, a conflict that has killed more than 40,000 and displaced around two million more.

Attahiru had once been in charge of leading the frontline offensive against Boko Haram’s commander Shekau in the northeast in 2017.

Local intelligence sources said Shekau had been seriously wounded Wednesday when rival jihadists attacked his stronghold in the northeastern state of Borno.

Sources said Shekau was wounded when he shot himself to try to evade capture by militants from the Islamic State in West Africa Province (ISWAP).

One intelligence source said Shekau had already died from his wounds in Nainawa village on Thursday, though that was not confirmed by authorities.

A villager told AFP he had seen a body driven into Nainawa on Thursday in a convoy of some 20 Boko Haram vehicles.

Neither ISWAP nor Boko Haram have reported Shekau dead, but analysts said his loss would be a huge blow to his faction and potentially allow ISWAP to consolidate territorial control in Nigeria’s northeast.