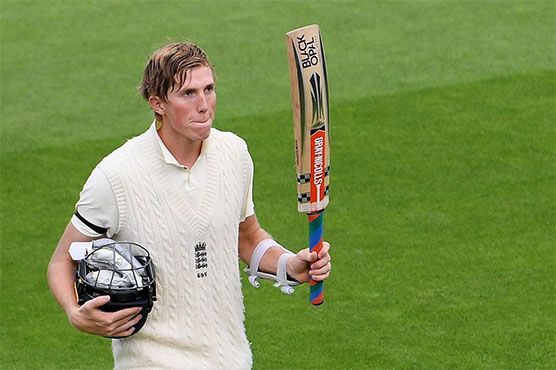 Crawley’s career ‘flashed before his eyes’ during Pakistan century

SOUTHAMPTON (AFP) – Zak Crawley said his fledgling career “almost flashed before my eyes” as he completed a maiden Test century that put England in a strong position on the first day of their series finale against Pakistan at Southampton on Friday.

Crawley s commanding 171 not out was the centrepiece of England s 332-4 at stumps after captain Joe Root won the toss.

Jos Buttler (87 not out) proved a fine, free-scoring ally to Crawley during an unbroken stand of 205.

Crawley came in early, with England struggling at 12-1 after the loss of Rory Burns.

But the 22-year-old batsman, in just his eighth Test, got off the mark with a boundary and rarely looked troubled during what was just the fourth first-class century, and highest score, of his career.

During the drawn and weather-marred second Test at Southampton, Crawley said he “massively wanted” to score an England hundred.

And after Friday s stumps he told Sky Sports: “When I was about 91, I was really nervous.

“Jos didn t think I was, so I must have been hiding it pretty well!”

“I just tried to play straight and play every ball on its merits.

“It was an unbelievable feeling, to see everyone else up there on the balcony, clapping — it almost flashed before my eyes, my whole career so far,” he added, with the applause of his team-mates compensating for the absence of spectators in a match once again being played behind closed doors because of the coronavirus.

England, 1-0 up in a three-match contest, will win their first Test series against Pakistan in 10 years if they avoid defeat at the Ageas Bowl.

With Pakistan playing just four frontline bowlers, there was pressure on leg-spinner Yasir Shah to give captain Azhar Ali control, even though a first-day pitch rarely favours slow bowlers.

Crawley reverse-swept Yasir for four during a third fifty from 62 balls and at stumps the spinner s return was 2-107 from 28 overs.

Pakistan spin-bowling coach Mushtaq Ahmed said the tourists had been hampered by losing the toss in blustery conditions.

“The toss was vital, because the way the wind started it was very difficult for the bowlers to maintain line and length consistently — tough for young people like Shaheen Shah Afridi and Naseem Shah — they re new in Test cricket.

“But one thing we can be proud of is they made a huge effort,” the former Pakistan leg-spinner added.

“But the pitch was flat and give him (Crawley) credit, he played a brilliant innings,” insisted Ahmed, who was adamant Pakistan could fight back.

“We have the second new ball, so we will try to get them (England) out in the first session for under 400,” he said. “Once we get one of these two out, we get into the tail.”

Crawley, fresh from his 53 in the second Test, brought up an 80-ball fifty off the last ball of before lunch when he off-drove left-arm quick Afridi for four.

England, however, lost two wickets early in the second session to be 127-4.

There was little Root could do on 29 when a full-length ball from teenage paceman Naseem seamed away late to take the outside edge, with wicketkeeper Mohammad Rizwan holding a fine diving catch.

But Ollie Pope contributed to his own dismissal, bowled playing back to Yasir s quicker ball.

Crawley, whose previous Test-best was the 76 he made against the West Indies at Southampton last month, spent the 20-minute tea interval on 97 not out.

But two twos off paceman Mohammad Abbas saw Crawley to a 171-ball hundred, including 11 fours.

Pakistan took the new ball but Buttler s cover-driven four off Naseem in Friday s last over raised a 200 stand with Crawley.

McKenzie quits as Bangladesh batting coach due to virus